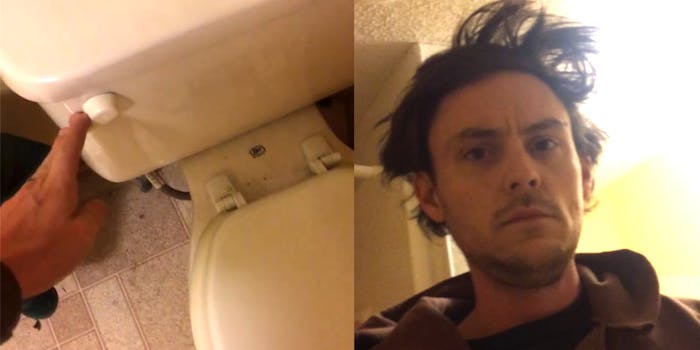 Let’s all laugh at this guy’s weird-a** toilet

Don't call a plumber. Just sample it and remix it.

What the hell is up with this guy’s toilet?

And, more importantly, what the hell is up with his hair?

YouTube user Evan Hawkins has a toilet that makes a really strange noise when he flushes it.

It sounds kind of like there’s an F1 race or a dance-hall concert going on inside the tank. That would be pretty awesome, but it’s impossible. So this is just weird.

One redditor might have the truth of it: a busted fill valve.

Here’s a much better solution: Don’t fix the weird-ass toilet—remix it. It’s further proof that everything can and will be sampled. Redditor BannedFromEarth took the sound and spun it into something awesome.

He layered the already present noise with a little more air horn, threw in some bass, a couple of synths, and trippy effects to the video. The final product is a pretty cool-sounding and danceable track.

Evan Hawkins’s toilet was already telling him to “turn up” every time he used it, but now he has something to groove to when he does.