The move ISPs are making away from speed pricing towards data caps is bad news. Want to go back to the days of measuring your Internet use? We didn't think so.

When Internet service providers (ISPs) charged by the minute back in the days of dial-up, every second that you spent online needed to count. Remember those days of hoarding the ticking minutes and seconds, imagining our monthly bill growing with every log on? Thankfully many online users today won’t, because eventually customers revolted against the per-minute pricing plans—thereby ushering in an era of exploration, experimentation, and growth online.

Unfortunately, ISPs are trying to bring the bad old days back. And this time, they are using something that most people do not even really understand: data caps.

rnet for everyone else.  Soon it became clear that “data hogs” looked a lot like people who just wanted to use the Internet. So ISPs sticking with the data caps are changing their tune, beginning to insist that the real reason that we need data caps is because it’s the only way to charge different people different prices for Internet connections.

No matter what the justification actually is, the outcome is the same. Shifting from today’s speed-based billing to data-based billing is a recipe for slowed innovation online.

What ISPs are talking about here are pricing tiers. And talk about pricing tiers is really talk about price discrimination. Contrary to how it sounds, price discrimination is often a good thing. It allows a seller to offer a product at different prices to different people. This can give the seller a way to make more money from people who value the service a great deal, while still offering it to people who value it less. It is why you can afford to buy an airplane ticket for your vacation if you plan ahead and purchase the ticket well in advance, but that corporate manager flying to a last minute meeting pays three times as much to sit right next to you.

The trick to appropriate pricing tiers is to pick a good way to sort the high-value customers from the low-value customers. Since sellers usually cannot read customers’ minds or get access to their bank accounts, they must find another way to identify which customer is which. They need to find a proxy. For airline tickets, that’s often determined by how far in advance you buy your ticket. There have been a few different proxies used to try and sort broadband customers. Data may be the worst.

Let’s go back to the original proxy: time. As dial-up veterans recall, people accessed the Internet at a per-minute rate. Interestingly enough, in many ways, time spent online was a very effective proxy for how much a consumer valued her connection. As an added benefit, people had an existing understanding of time and could (reasonably) estimate how much time they were spending online, and therefore how much money they were spending.

But per-minute billing was not popular with customers. It turned every session into an exercise in watching the clock, getting the information you needed as quickly as possible and signing off. It made the Internet a precious thing that could be stressful to browse and explore.

Fortunately, the dial-up ISP market was fiercely competitive. This competition drove per-minute prices down and eventually lead to unlimited monthly access. Suddenly, the Internet was easy to explore, welcoming for newcomers who were previously wary of being surprised by high bills at the end of the month. Simply put, this was a great thing for the growth of the Internet.

The shift to speed

Of course without time, ISPs needed to find a new way to differentiate their customers.  Always-on broadband introduced a different proxy for value: speed.

Speed was an excellent way to signal value to consumers because it gave them immediate feedback. If a particular website always loaded slowly, the consumer could evaluate—in real time—if they wanted a speedy load time for that site badly enough to pay more for a faster tier. If the annoyingly slow download was a rare occurrence, it probably wasn’t worth paying extra to speed it up. 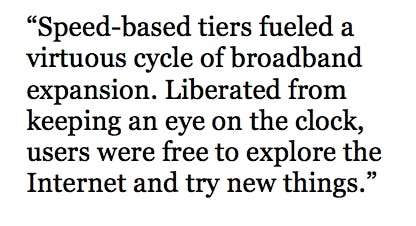 Speed had none of the drawbacks of time. There were no financial penalties for exploring the Internet and trying new things, so it didn’t hinder exploration. There was no meter to keep track of, or minutes to count. Doing something new—like building a website or streaming a song—did not require a user to give up some other already-established Internet habit for the month.

Speed-based tiers fueled a virtuous cycle of broadband expansion. Liberated from keeping an eye on the clock, users were free to explore the Internet and try new things.  As they discovered more and more new things, their demand for faster connections increased. Their move up the pricing scale helped fund further network improvements, making speed more accessible and restarting the cycle once again.

The shift to data

Unfortunately, some ISPs now appear to be moving away from the consumer- and innovation- friendly speed pricing tiers towards the much more ISP-friendly data tiers. This is like stepping back towards per-minute pricing, but it actually makes it worse.

Once again, consumers with a data tier are required to keep meticulous track of what they are doing online. Using the Internet becomes an exercise in worrying about paying overage fees, not in exploring and trying something new. When someone sends you a link to a new thing and you are close to your data cap, you can’t just click on it. First, you need to decide which of your existing internet activities you will give up to give the new thing a shot.

Inevitably, this type of meter watching freezes innovation and exploration. Instead of seeking out new applications and then demanding connections that can support them, consumers stick with what they know and assume what they have is “good enough.” After all, adding something new to their internet diet is just going to bring them closer to their cap. 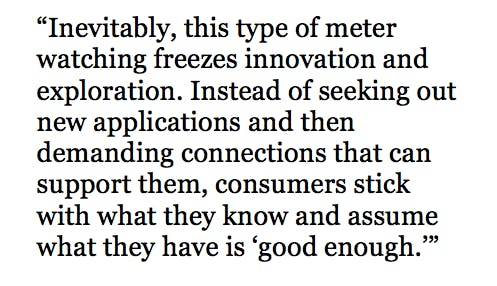 Data caps introduce new problems, as well. Unlike time, almost no one has an intuitive understanding of data, even sophisticated users. A minute of Internet access is always equal to a minute of Internet access. Even if you know how many megabytes are in a gigabyte, a minute of streamed video or music can require an amount of data that varies depending on the network conditions at the moment it is being streamed. In fact, measuring data usage is so complicated that few ISPs are even able to present independent certification that their own meters are accurate.

And if that wasn’t enough, data pricing tiers also massively delay the feedback loop offered by speed. When a user receives an alert that she has exceeded her cap, she must try and reconstruct days, weeks, or even a whole month’s worth of usage and try to identify which data-intensive activities she was engaged in, how important they are to her, and if they are worth paying extra to support. Do you remember everything you did online yesterday, let alone last week?  If so, can you rank all of those activities by importance and then again by their relative data consumption?  In light of this uncertainty, it should come as no surprise that many consumers choose to over-buy and under-use data. Which, of course, is good for ISPs, and bad for consumers.

Michael is a vice president at Public Knowledge, a digital advocacy group in Washington, D.C. He focuses primarily on issues that impact the ability of the public to use the Internet and emerging technologies such as 3-D printing and open source hardware.

This article  has been adapted from Public Knowledge’s policy brief, “The Wrong Tool for the Job: Data Caps, Price Discrimination, and Bandwidth Pricing.”