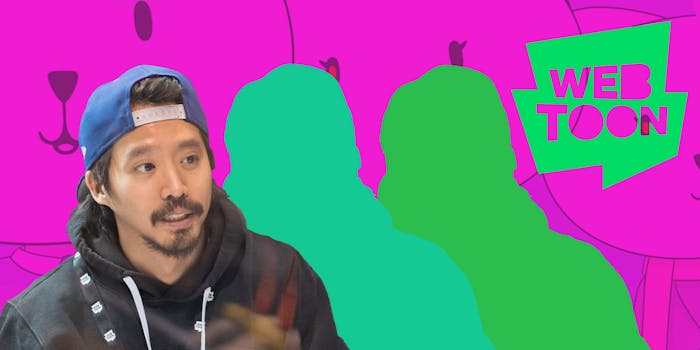 'This industry would not exist without creators.'

We’re sitting down with leaders on the business side of the creator economy to get their best advice for creators looking to launch and develop their careers. This week, we spoke with David Lee, vice president of content at Webtoon.

Webtoon is a comics platform based in South Korea where the “webtoon” digital comic style first arose in the 2000s. Since its founding, the platform has gone global, and it currently touts a creator monetization program for those located in the United States.

For those of you unfamiliar with webtoons, they are scrollable, vertical strip comics which originated in South Korea during the 1990s and 2000s. In these early days, webtoons were mostly known domestically, but the comic style grew to international popularity in the 2010s.

In 2004, South Korean media conglomerate Naver launched an in-house webtoons publishing company known as Naver Webtoon. The company, after gaining attention internationally, decided to go global in 2014 with the launch of an English-language webtoons publication platform, formerly known as Line Webtoon. They have since expanded into various other languages including Chinese, Thai, Indonesian, Spanish, French, Japanese, and German.

The English-language service has since been rebranded to be simply known as Webtoon. The platform currently hosts drama, romance, action, fantasy, sci-fi, thriller, and comedy webtoon series made by creators, and offers translation services to expand its reach to multiple countries.

David Lee, who has been with the company since 2014 and is currently vice president of content, told Passionfruit about Webtoon’s initial expansion into the U.S. market, where its product initially wasn’t very popular.

“At least when we first started, there had been more of a perception bias in the Western world where people would see comics and would instantly think, ‘Comics are for kids’ or ‘Comics are all about supers, comics are for nerds’… We had to sort of lay out the groundwork, so we wanted to build our open platform, attract creators, and sort of send a message to the creator community and aspirational creators, ‘Hey, we’re here.’ You can start making comics, and you can make money,” Lee described.

Lee helps source and develop English-language content. Once he identifies talent, David said he provides support to help bring out their vision for a series. Today, there is a large pool of English-language creators that he works with.

Since 2014, fandom communities around webtoons in the U.S. have grown. Webtoon currently has over 15 million monthly active users in the U.S. out of its 82 million monthly users worldwide. The company officially partners with and offers contracts to creators for its “Originals” section, and allows independent creators to self-publish on its “Canvas” section.

In 2019, the company introduced a monetization program for creators in the U.S., bolstered by an advertising revenue sharing program. Today, U.S.-based Webtoon creators who reach 1,000 subscribers and 40,000 monthly page views per series are eligible to apply to receive 50% of revenue from ads played on their content, according to Webtoon’s website. Creators from some other countries can participate in the program, depending on if the region offers ads in the area.

Webtoon also offers Originals creators contracts to receive advances and revenue-sharing on paid content transactions like Fast Pass sales on their pages. Fast Passes allow users to unlock early access to particular episodes from a series. Originals creators also maintain copyright control of their intellectual property—meaning they maintain the right to reproduce their work, create derivative works, make copies, and so on.

In 2021, fandom-driven reading and writing platform Wattpad was acquired by Naver, leading to the creation of a combined entertainment studio between it and Webtoon. Now, some Originals creators have the opportunity to arrange television, book, and film adaptation deals with Wattpad Webtoon Studios.

In addition, Canvas creators are offered stipends called Creator Rewards, ranging from $100 to $1,000 depending on the success of their series. Webtoon also announced in December that it would be launching a new tipping system for Canvas creators later in 2022. Alongside these monetization options, many creators integrate their personal Patreon pages on their Webtoon profiles to attract extra income.

“I think it’s a great place to find your audience. And we also have an incredible community of creators, who understands what it’s like to create digitally,” Lee described. “This industry would not exist without creators. Everything that we do and every business we can build centers around what the creators create. So I think it’s always in our best interest [to consider] what are the best ways for us to provide support to creators?”

Mike Birchall (@mikebcomics) is the U.K.-based creator behind the popular Everything is Fine horror series, which has over 1.2 million followers on Webtoon. Birchall told Passionfruit he started using Webtoon’s Canvas self-publishing platform as an up-and-coming comic designer. His initial design for Everything is Fine was in black and white, and took off after being featured in a special “Halloween Haunts” section on the Webtoon platform.

“My subscribers went from about 70 to 1000 overnight. After that I put all my focus into Everything is Fine, drawing in my lunch breaks at my day job and every spare moment I had in the evenings. Then eventually I got the email from my soon-to-be-editor [asking] if I wanted to sign a contract and make it a Webtoon Original,” Birchall said.

Birchall was able to turn Everything Is Fine into a full-color series for Webtoon Originals. The offer helped him quit his job and pursue comics full-time. Birchall said he gets paid per episode and also shares revenue with Webtoon from ads, merchandise, and Fast Pass sales. He says Webtoon accounts for the majority of his income, although he also earns from a personal merchandise store and Patreon account.

Despite his success, Birchall acknowledged he is lucky to be one of the few success stories from a sea of people trying to make a living as a comics creator. He said he personally almost gave up as an artist when his first comics didn’t do well.

“Making a living on any comics platform is near impossible, and your success isn’t always correlated with talent and effort. I know a ton of incredible artists and writers who deserve way more success. It’s no one company’s fault, it’s just because there’s thousands and thousands of people trying to do this and stuff gets lost in the pile,” Birchall said.

Regardless, Birchall said he recommends up-and-coming creators on Webtoon pay attention to feedback and respond accordingly. He shared an exercise: post three short, “achievable” comics projects on every platform you can think of and ask yourself a bunch of questions about what worked and what didn’t.

“Learn the difference between mean, thoughtless comments vs useful feedback, and look at how each platform can be used to monetize if you continue. If one outdoes the others by a clear margin, try making more of it. If none of them do well, you’re probably doing something wrong. That’s when you need to really look at improving either your writing, your art or your strategy,” Birchall said.

Steff Hermes (@s0s2), another Webtoon creator and freelance artist, told Passionfruit they were surprised how much advertising revenue they were able to receive from their series The Little Trashmaid, which currently has over 1.2 million followers.

“Shortly after I started publishing on Webtoon, I received an email asking if I wanted to opt into their ad revenue program. I said ‘yes’ thinking it would be just a few extra dollars, but I was pleasantly surprised. While I still do freelance work across all of my projects, The Little Trashmaid is now my main source of income,” Hermes said.

Although Hermes received an offer to become an Originals creator, they said they decided to stay on Canvas due to the ability to keep a more flexible posting schedule.

Junepurr, the creator of romance series SubZero, also told Passionfruit they received an offer to become an Originals creator, after SubZero attracted over 360,000 followers. Junepurr told Passionfruit the offer to be an Originals creator “changed the course” of their life. In 2019, they quit their accounting job to work on SubZero full-time, receiving merchandise deals, marketing assistance, and translations services from Webtoon to expand their audience reach.

“I’ve somehow managed to amass about 2.8 million subscribers on the Webtoon app, 120,000 on Instagram, 45,000 on Twitter… Mind you, I wasn’t actively trying to grow an audience, but Webtoon’s platform lent itself to that, which further gives creators the possibility to monetize on those platforms as well,” Junepurr said.

After witnessing the success of some of Webtoon’s most popular creators, Lee said he aspires for every comics artist to be able to make a living through their work on Webtoon. He shared some simple advice for creators interested in joining.

“Just get out there, start showing your work, sharing your work. And I think the people who constantly show up will get noticed, and that’s how a lot of our successful creators got noticed,” Lee said.

Are you working at a creator economy company? Email [email protected] for a chance to get featured in an upcoming newsletter.