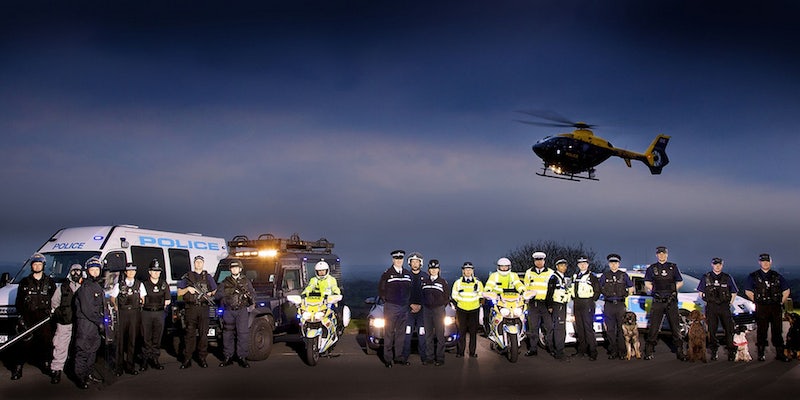 Cops don’t care about your privacy—so why are they so worried about being tracked?

Police departments across the country are decrying a police reporting feature in the popular GPS app Waze, saying it puts officers lives in danger by potentially helping cop killers find their targets. Calling the app a “police stalker,” some are even attaching it to the deaths of two NYPD officers last month, an event that sparked protests by police officers and made clear the unification police forces will act with when presented with a threat.

All of this is a bit of an overblown reaction to Waze, a Google-owned entity that uses crowdsourced data to give accurate reporting of road conditions. Users can merely report whether a cop is present and if they are hidden. Far from something that could enable stalking, the app merely allows people to see what they can see with their own eyes. It gives no identification, no descriptives, no car numbers. It’s a binary setting for a single location: “No Cop” or “Cop.”

This reaction is one in a long chain of police complaints that can often seem hypocritical coming from law enforcement as an industry. They struggle to handle an app that reports police locations yet freely track citizens’ cell phones without a warrant. They feel body cameras are an invasion of their privacy yet demand the use of drones to further surveil those they serve and protect. They say social media makes their life harder, though everyone knows it practically does their job for them.

Police are coming after your privacy while defending their own.

Perhaps “they” is a misnomer when referring to police—major departments are changing their minds about body cameras, for example—but the trend is undeniable: Police are coming after your privacy while defending their own, furthering a well-entrenched oppositional mentality towards the populace.

The only problem, however, is the populace isn’t really coming after them. According to the National Law Enforcement Officers Memorial Fund, officer fatalities are at a 50-year low. Despite the privilege cops seek for existing in the crossfire of dangerous criminals, “police officer” doesn’t even crack the top 10 when looking at the careers most likely to kill you. Listening to those officers complaining about Waze, however, and you’d think they were being personally hunted by maniacs everyday.

And if they were, those supposed cop killers would have a lot more methods than Waze to find their targets. The police tracking feature of Waze is hardly new to that app and can be replicated by any number of speed trap locators and similar programs. Trapster, a former competitor to Waze, once rocked 21 million users. And far from Waze’s attempt to replace your phone’s native GPS app, Trapster worked for the expressed purpose of avoiding speed traps by giving the location of police. Somehow, this fancy new tool didn’t lead to a rash of cop murders.

Old-fashioned police scanner radios will tell you far more about police activity and location than any app. Online streams of said scanners have become a staple for any news junkie, especially in fast-moving situations like the protests in Ferguson, Mo., or the siege of a Sydney coffee house last December. This is why many departments have been seeking methods of encrypting the radio signal they use to communicate to the chagrin of journalists.

Old-fashioned police scanner radios will tell you far more about police activity and location than any app.

Here again, however, we find the irony of law enforcement’s stance on privacy. While using encryption for their own protection, all levels of law enforcement are criticizing phone and software manufacturers for offering encrypted products to consumers. “Encryption threatens to lead all of us to a very dark place,” said James Comey, director of the same federal agency that teaches local cops how to track cell phones without a warrant. President Obama agrees.

Compare a citizen’s right to encrypt a phone they own—perhaps no different than keeping their belongings in a safe—to the ever-enlarging capabilities of police departments. Stingray systems, which track cell phones by simulating a cell tower, are in operation in 19 states with zero legal basis for their use. Searching the cell phone of a suspect was a commonplace practice until the Supreme Court knocked down that right last June, a decision some departments have chosen to ignore. And they dare to complain about an app that tells you no more a friend might mention over coffee?

Not all law enforcement, of course, feels so obscenely protective of their own privacy over the privacy of their citizens. The aforementioned surge of body camera usage has been praised by many departments as the devices make life easier for both citizens and officers. Even Waze has attracted the praise of some officers who argue making speed traps more visible encourages safer driving—unless your main interest is not public safety but driving revenue.

Which is the sad story behind all of this back-and-forth antagonism. These various arms races between citizens and police is the shadow of a complete deterioration between cops and the communities they swear to protect. The paranoia seen here by officers is far more deluded than the privacy concerns of the citizenry—we actually are being spied upon while they merely imagine their lives to be more at risk.

But both concerns speak to a complete distrust between these two parties. It is possible for something like Waze to benefit both ends of the discussion, and I’m sure most users are happy to let it help police as much as it helps them. No one wants to be afraid of the police, but it sure does seem they’re eager to be afraid of us.