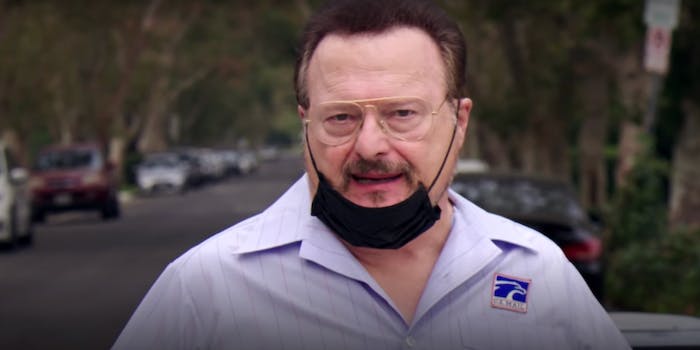 Newman is against meddling with the USPS.

One of pop culture’s most famous mailmen has now come out against Donald Trump’s attacks on the U.S. Postal Service in a new election ad.

Wayne Knight, who famously portrayed Newman—aka the mailman who liked to make Jerry Seinfeld’s life hell—throughout Seinfeld’s run, put the blue uniform back on and reprised what might be his most famous role for PACRONYM, a Democratic super PAC.

Filmed in front of a mailbox that’s eventually taken away, it’s the sort of irreverent bit—but still entirely recognizable to anyone who’s watched Seinfeld—that you’re surprised hasn’t been pulled off before. According to Knight, it’s not for a lack of trying: He received offers from the Emmys and a former Obama speechwriter to reprise his role, which he turned down. It wasn’t until former Seinfeld writer (who would later become a Veep showrunner) David Mandel approached him that Knight changed his tune.

As far as celebrity-fueled campaign ads go, it’s a pretty good one. Newman, who isn’t mentioned by name at all, highlights all of the harm that the Trump administration has done toward the USPS and his attacks on voting by mail while urging people who want to vote by mail to do so now. After all, nobody can mess around with the USPS except a mailman. As Knight pointed out, Newman is the very embodiment of someone who’s tried to undermine the USPS from within and has always failed.

“Newman has been trying to subvert the Postal Service for his entire career,” he told Entertainment Weekly. “He has not been able to do it. It is a well-oiled machine with a couple of bad cogs in it that every now and then get caught. But in general, the thought that you can deliver something to a one-room post office in Alaska for 55 cents is pretty incredible.”