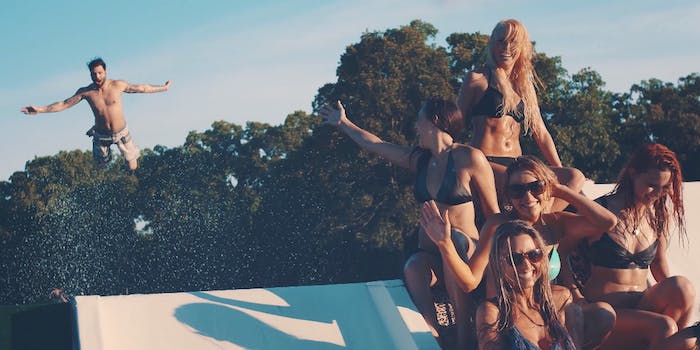 Kids and redditors, don't try this at home.

Redditor Matt Hess clearly did not think through his plan for Internet fame before grabbing a GoPro and sliding down the world’s tallest water slide, the massive Royal Flush at BSR Cable Park in Waco, Texas.

The slide is so dangerous all riders are required to wear a life jacket before taking the plunge. But Hess nearly got done in by another obstacle—the head-jarring speed bumps at the slide’s lift.

“Went to that mega slide that made front page of Reddit last month,” he wrote on YouTube, where he posted the footage of his 16-second adventure. “I was the only person brave enough to go down backwards and the only person stupid enough to not realize you’d smack your head on the incline— the look on my face is priceless.”

We’re just glad you survived to share your humiliation with the rest of us, buddy.

The Reddit link that got Hess so excited about the slide was this viral promo video, which one astute redditor described as a four-minute long Juicy Fruit commercial. It features stunt divers somersaulting into a pristine blue pool while bikini-clad women ascend to take their turn. None of these folks are wearing life jackets.

Looks like the reality is 10 seconds of terror followed by a swift jolt to the head.

Thanks for the reminder, Matt.

Screengrab via Round III Media/YouTube