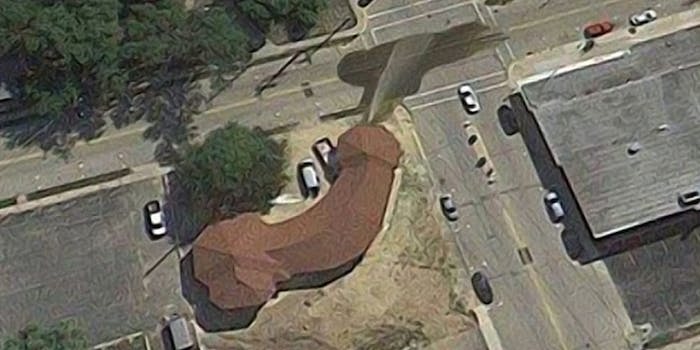 No, a d**k-shaped church did not have a water main break at the tip

You can be forgiven for hoping.

You may have come across a tweet proclaiming just that.

OK. There's several layers of fun to be had with this screen shot. pic.twitter.com/IIVj3qloXM

You can be forgiven for thinking that in a twist of beautiful coincidence, a water main broke at exactly the tip of the church’s dick hole, causing it look like the church dick was spewing… something.

After all, how could you not believe it after seeing that tweet?

OK. There's several layers of fun to be had with this screen shot. pic.twitter.com/IIVj3qloXM

Yes, clearly… except, why would Fox and Friends be covering a water main break at a church in Illinois? And would they really say tip? And also, haven’t we seen this before?

OMG! Is this for real? Water Main Burst at Tip of Christian Science Church, Dixon, IL Surly this is fake, isn't it? pic.twitter.com/l3QaaZKEXS

Unfortunately, it was fake then as it is now. Not only did the New York Daily News call it a Photoshop job, a dick-shaped-church-water-main-break-truther went straight-up Zapruder film on it, proving that unless every single car happened to be in the same location during the water main break as they were when Google’s satellites passed by, this was a straight up forgery.