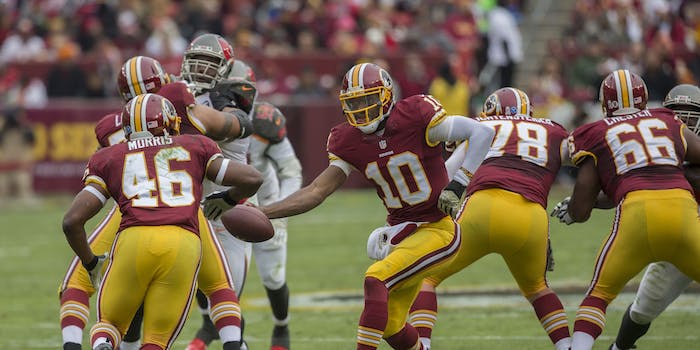 In the modern age, a subtle and digital way to say 'you suck.'

The NFC East has a football rivalry unlike most in the NFL. The teams often have an equal chance of winning the division at the start of the season, and three of the four stadiums are close enough to one another for quick road trips—with fans of America’s team located throughout the country. Everyone hates everyone equally, and it can often get ugly on game day.

But sometimes to the delight of everyone—even NFL fans who don’t have any stakes in the matter—it’s also full of giddy trollishness.

A couple days ago someone on Reddit discovered that if you go to TheWashingtonRedskins.com, you’ll end up on a site much different than the one you’re trying to reach. Instead of reaching a page dedicated to everything Washington Redskins, you’ll end up on the New York Giants homepage instead.

Longtime Washington fans know that if they’re looking for information about the team (and not the canceled trademark registration over its name), they can always go on Twitter, Facebook, or even the official Washington website, so the gag likely won’t fool them. But more casual fans and people who might not have aligned themselves with an NFL team might be swayed. If there’s any new Giants fans that come out of this, it’s already a victory.

Meanwhile, fans of the Dallas Cowboys and the Philadelphia Eagles are likely kicking themselves for not thinking of it first, but there’s still two more months until the new season officially kicks off. That’s plenty of time for even more harmless fun.