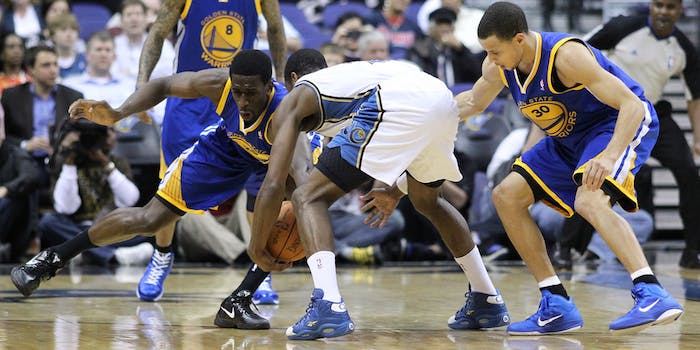 Peter Guber, the co-owner of the Golden State Warriors basketball team, issued an apology to team employees on Monday after sending out an email listing “hoodish” among languages he planned to learn to communicate with players in the league. Guber claimed the use of the word was a typo and that he actually meant to type “Yiddish” instead.

Guber’s email came after Warriors director of media relations Raymond Ridder forwarded to team employees a league press release that the NBA will have a record 101 international players from 37 different countries on opening night rosters for the 2014–2015 season. Ridder forwarded the announcement saying, “The following is a great example of the growth of our league. There are 101 international players on NBA opening night rosters, which represents 22% of the league. We have five [5] international players on our roster (33%), which includes Andrew Bogut, Leandro Barbosa, Festus Ezeli, Ognjen Kuzmic and Nemanja Nedovic. We’ve come a long way…”

In an email obtained by Yahoo, and sent from Guber’s phone to employees throughout the team, the owner stated, “I’m taking rosetta stone to learn Hungarian Serbian Australian swahili and hoodish This year. But it’s nice.”

After at least one employee found the email offensive, Gruber sent out another clarifying that he had meant to type “Yiddish” and not “hoodish.”

“Someone just brought to my attention that an email I responded to earlier contains the word ‘hoodish,’ which I don’t even think Is a Word, and certainly not the one I intended to use,” Yahoo reports the email read. Guber further explained, “I intended to type Yiddish. Either my mobile fone [sic] autocorrected or it was typed wrong. In any event I regret if anyone was unintendedly [sic] offended.”

This latest league controversy comes just two months after Atlanta Hawks owner Bruce Levenson announced that he had decided to sell the team after apologizing for racially insensitive remarks he made in a team email sent in 2012.

In April, ex–Los Angeles Clippers owner Donald Sterling was banned from the NBA and later forced to sell the franchise after recordings were made public of him telling his alleged girlfriend that he did not want her bringing African-American friends to Clippers games.

Guber is also a co-owner of Major League Baseball’s Los Angeles Dodgers, but there is no word on whether this incident will have any implication on his standing with that team or the Warriors.