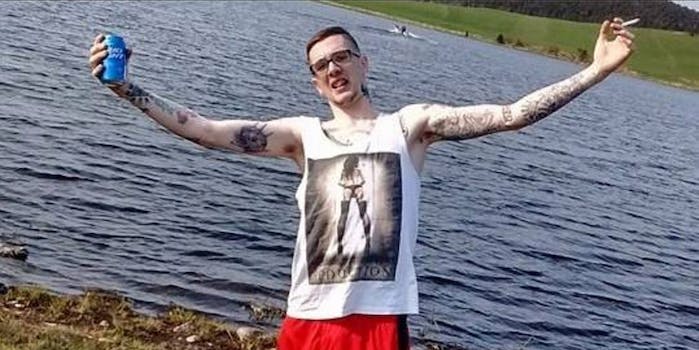 This is how you stay calm under pressure.

A man with five outstanding warrants has turned himself in after local authorities posted a wanted sign on Facebook—but not before getting a few things done first.

Brandon Melbourne, 24, reportedly breached court orders five times and has failed to appear in court on multiple occasions. On Sept. 10, the Royal Newfoundland Constabulary (RNC) posted his mugshot to Facebook, encouraging people to share the post across social media.

Screenshot via the Telegram

That’s when things got interesting.

Followers of the page started saying that Melbourne looked a lot like a bank robbery suspect the RNC had previously posted about. That was enough to spur Melbourne to weigh in.

“Bys oh bys (sic) I look far from the BMO suspect different glasses , bigger nose and no neck tattoo but yet I’m ‘guilty,’” Melbourne wrote, according to the Telegram. He continued:

Dudes bigger than me also y’all just small minded people with nothing better to do than judge someone you don’t know, your acting like it’s the 70s and tattoos are a bad thing get with the times by its A art of culture these days having a tattoo don’t change who you are or make you tough by any means.

I can understand your opinions it kinda do look a little like me but my neck tattoo comes on to my face and this guy has zero tattoos so I think the police need to step up there game and focus on who really did it because I’d say he is sitting back looking at all this having the laugh of his life knowing he is safe tucked away somewhere. I wouldn’t Robb a chocolate bar let alone a bank so all yee gotta stop judging someone you don’t know.

Of course, his post caught the attention of the RNC: “In the meantime… we have five warrants we would like to discuss with you. Please get in touch Brandon.”

After a couple of exchanges, which included the RNC offering to pick him up, Melbourne promised he would turn himself in around 9pm. Apparently, he had some important loose ends he needed to tie up first.

The saga ended with this update from the RNC, which subsequently deleted its original post.