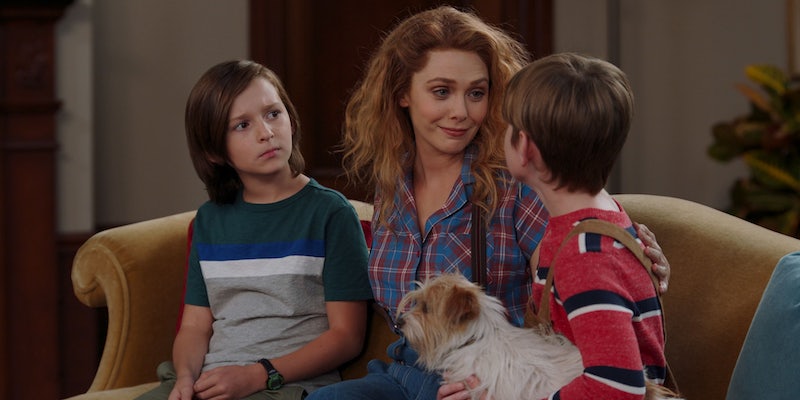 The show couldn't decide what to do with Wanda's twin sons.

WandaVision‘s finale was kind of a letdown, discarding the show’s weirder side in favor of a bombastic Marvel ending. Bland action scenes took priority over emotional storytelling, including one especially weird detail: Wanda and Vision’s twin sons, Billy and Tommy. A post-credits scene suggests they may return in later spinoffs, but overall, their role highlighted an ongoing problem with how superhero media depicts motherhood. Basically, most Marvel and DC narratives are pretty bad at it.

As a male-dominated genre, superhero media often focuses on daddy issues while ignoring the role of moms. Within the MCU, we see plenty of stories about complicated father-son relationships (Tony and Howard Stark, Thor and Odin, Peter Quill and Ego) and influential-but-dead father figures (Peter Parker’s uncle, Black Panther’s dad, Daredevil’s dad), but mothers are either nonexistent or comparatively unimportant. In Guardians of the Galaxy, Peter Quill’s dead mom provides the soundtrack but isn’t a proactive character. Thor’s mom has a more meaningful role, but she pales in comparison to her powerful husband. And Tony Stark’s dead mother may as well be a mannequin. Black Panther’s mother Ramonda is the only example with on-screen clout.

This absence of maternal storylines is clearly due to sexism, but the MCU’s lack of parental protagonists is more complicated. Aside from Tony Stark’s domestic epilogue in Avengers: Endgame, only one of the MCU’s main superheroes is a parent: Ant-Man, whose goofy dad persona is baked into his role. His daughter can also conveniently be left with his ex-wife when he needs to do Ant-Man stuff, illustrating the logistical reason why most big-screen superheroes don’t have kids. In a two-hour action movie with a simple “good vs evil” narrative, there usually isn’t room for a secondary subplot about parenthood. Literally and narratively, kids would just get in the way. This brings us to WandaVision, a show where children are integral to the story.

WandaVision is all about Wanda Maximoff’s desire for a family. Orphaned at a young age, she and her brother Pietro had a difficult life before they joined the Avengers, at which point Pietro died. While grieving her brother, Wanda fell in love with Vision… who also died before they could make a home together. So she uses her superpowers to make a picture-perfect suburban life with a fictional recreation of Vision, complete with twin sons who echo Wanda and Pietro’s superpowers: Billy (magic) and Tommy (super-speed).

Billy and Tommy only exist for a couple of weeks in real time, but Wanda and Vision love them like real children, and they “age” to the point of being about ten years old. These kids also appear to be self-aware, unlike the real humans that Wanda brainwashed to act out her sitcom fantasies. So from episode 3 (when the twins are born) to the finale in episode 9, Billy and Tommy are treated like Wanda’s real, live kids. She loves them, and the finale includes a (rather poorly-thought-out) scene where Monica Rambeau steps in front of a bullet to save their lives. But then they’re killed off at the end with almost zero fanfare, making way for Wanda and Vision to have a tearful farewell and provide teasers for future MCU spinoffs.

Billy and Tommy’s personhood is totally inconsistent in that final episode. We’re meant to believe they’re real (albeit magically created) people right up until it becomes inconvenient to the plot, at which point we’re encouraged to forget them. Wanda and Vision tuck them into bed while a wall of magical light approaches the house, signalling the end of Billy and Tommy’s existence. But instead of reacting to this threat (which they definitely would, because they understand what’s happening!), the twins just lie down and wait for death to come. So at the last moment, the show decides with no warning that Billy and Tommy aren’t “real,” and that Wanda and Vision’s love for them can be easily dismissed. Ignoring the children’s rapidly-approaching disintegration, the show focuses on Wanda and Vision’s relationship—which is arguably just as fake because Wanda fabricated this version of Vision from thin air.

This all ties into an ongoing problem with superhero moms. In Marvel and DC comics, characters don’t grow old in real-time. So if a hero has a baby, they’re stuck with a perpetually young child until that kid either gets rebooted out of the timeline or is magically aged up into an independent adult. That’s what happened to Billy and Tommy in the comics: They were erased as babies and returned later on as teen superheroes. Sometimes parenthood can work as a long-term storyline, like in the soap opera storytelling of the X-Men comics, or Batman’s ever-growing household of tween sidekicks. But with female superheroes who get pregnant, motherhood is often a temporary (and inconvenient) blip in their story.

In its final episode, WandaVision revealed itself to be a speed-run of “temporary mom” tropes. Wanda was a mother, until she wasn’t. Her sons were important characters, until they weren’t. The show wasn’t actually that interested in exploring Wanda’s desire for a family, sidelining this idea in favor of a Scarlet Witch origin story. And despite the central theme of grief, Wanda mothballed her sons with barely a backward glance.

The final post-credits scene suggests that Wanda may use her powers to bring back Billy and Tommy, a storyline that conveniently uses motherhood for motivation without actually requiring any children on-screen. But that’s a footnote, separate from the main emotional arc of the show. Even in a self-contained miniseries about a woman in a domestic setting, Marvel couldn’t stick the landing on a portrayal of motherhood, sidelining her children in favor of action and MCU teasers.