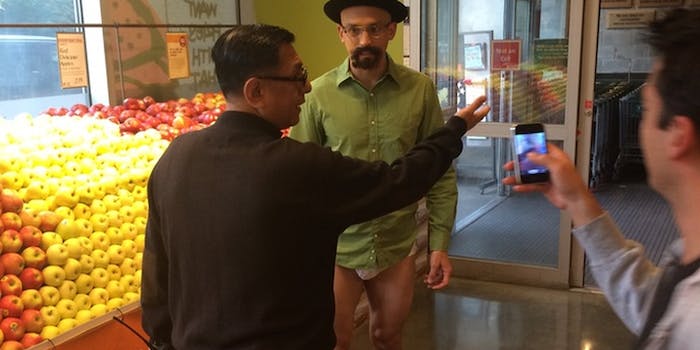 Walter White has a bad track record of stripping down in grocery stores.

If you’re a Breaking Bad fan, you know that Walter White has a bad track record of stripping down in grocery stores. Vaughn Vance must have been one of approximately 8 million New Yorkers dressed as the meth-slingin’ dad this Halloween, but it seems he was the only one to walk into a Whole Foods and get promptly booted out.

Vance, a videographer for Marc Jacobs International, was soaking up the attention that day. “People stopped me left and right for pictures and aimed cameras at me from cabs and bikes. Construction workers were howling (which I somehow found flattering),” he told Gothamist. But he didn’t get far in Whole Foods before managers stopped him.

I love #NYC for nobody giving me a 2nd glance on my walk to work this morning. #Heisenberg lives! pic.twitter.com/1Bwyj13QEN

Someone even filmed the altercation:

“I didn’t quite make it through the produce section before security stopped me (very politely) and said to me, ‘Mr. White’—I love that he addressed me by character—‘I’m sorry, but I need to check with my manager before you can go in, sir.’” The manager said his outfit violated store policy. “Meanwhile,” said Vance’s coworker Carley H., “customers were begging [the manager] to just let them take a picture of Walt before they kicked him out.”

“I can assure you I have seen females in shorter shorts prancing around and no man has ever considered that illegal!” Carley added.

Whole Foods “acted professionally,” Vance said, “and I completely understand why I was turned away.” The company, perhaps fearing New York’s Breaking Bad fans might boycott, later tweeted its support of Vance’s outfit:

@MarcJacobsIntl So sorry about that…pants are pretty essential when selling food! :) LOVE the costume @VaughnVance!