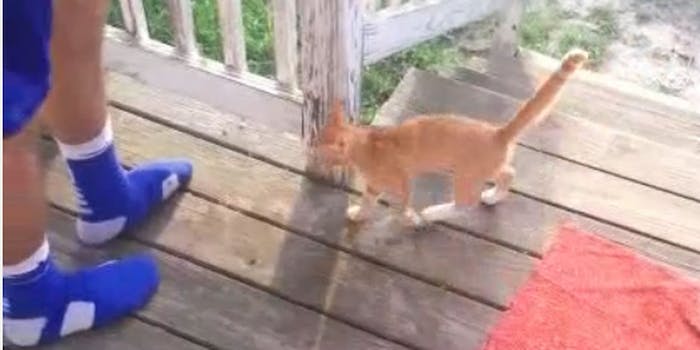 Some guy kicked a kitten on Vine, and now the Internet’s after him

You don't just kick a kitten and get away with it.

The Internet has brought out their pitchforks and torches to go after a Vine user that posted a clip of himself kicking a cat.

Walter Easley uploaded the six second footage to the video-sharing platform on July 28. The offending video went largely unnoticed until today, when it found its way to Reddit and 4chan.  Users of both sites were predictably furious.

On Reddit, a link to the video has shot up to the top of r/rage, a subcategory of the site reserved for incendiary content. That submission currently has 924 karma points and has received more than 300 comments, the lot of them condemning Easley for his behavior:

“To kick a cat you have to be a messed up person but to post it to vine like it’s funny, probably prompting other idiots to do the same thing, is unforgivable. This guy deserves whatever is coming to him.”

The response on 4chan has been even more intense. Mixed in with racial epithets, forum users have been dumping Easley’s personal information, including a Google maps screenshot of his possible home.

As per Easley, he’s only adding fuel to the fire by taunting those he’s pissed off. On Twitter, he laughed off people’s reactions.

Lol now I got somthing to laugh at all day

He also posted another video on Vine in which he threatened to kick another cat, but that clip has since been taken down.