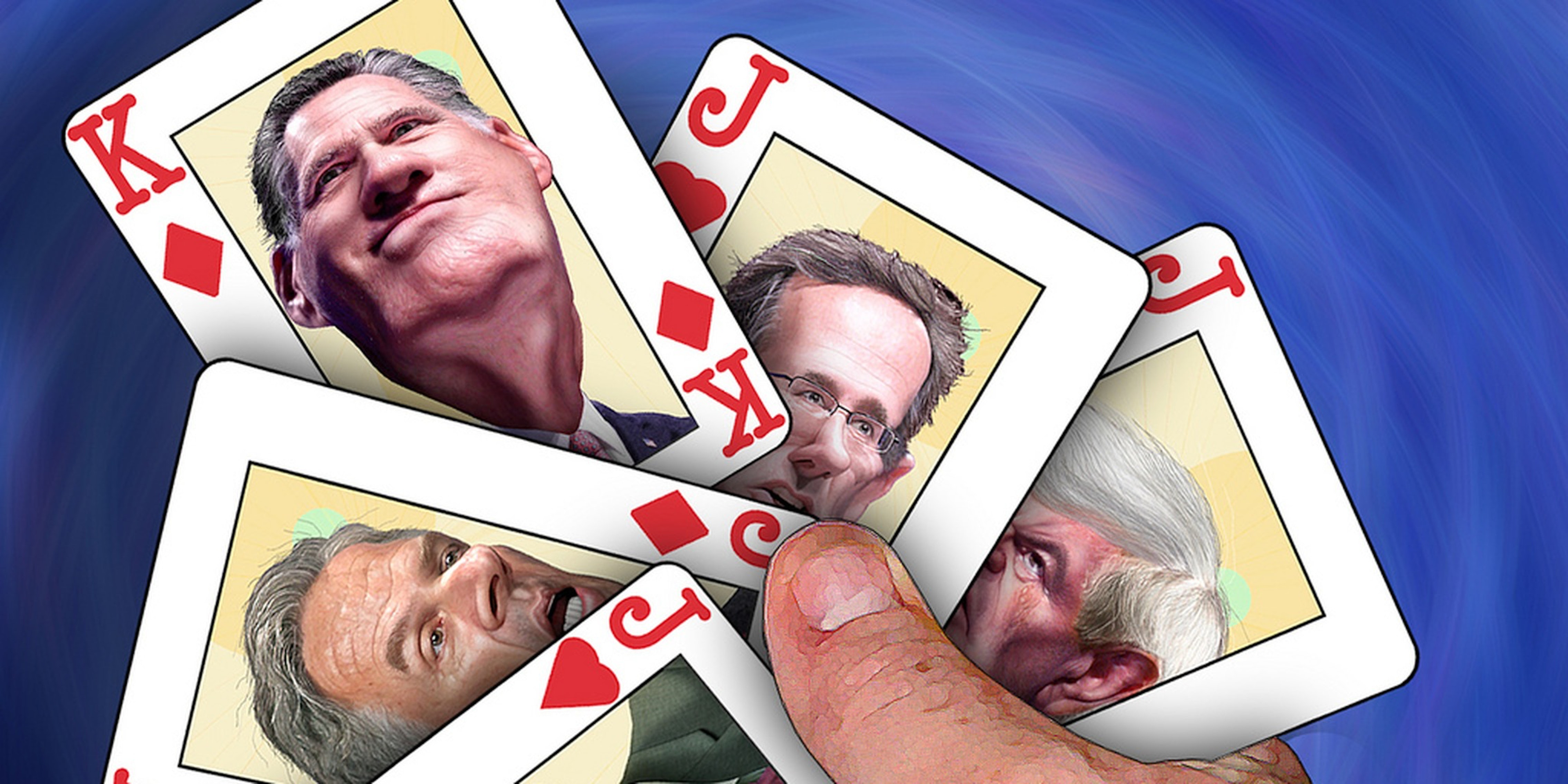 This is why we need more women in Congress.

When yet another old white man nationally embarrasses himself with his ignorance about how women’s bodies work, it isn’t enough to hold them up for richly deserved derision, as the Internet is wont to do. We must also learn a very important lesson: namely, that their poor understanding of experiences outside their own frame-of-reference demonstrates why we need more women in positions of power.

This may seem like a self-evident statement, but as both the controversial question asked by Idaho Rep. Vito Barberi (R) and the subsequent online brouhaha that it caused makes clear, it is anything but. As the state legislature continues to preside over hearings regarding a controversial anti-abortion bill, Barberi caused a firestorm on the Internet after a physician testifying against the bill told him that some colonoscopy patients swallow a small camera to get a closer look at their intestines. “Can this same procedure then be done in a pregnancy?” Barberi asked. “Swallowing a camera and helping the doctor determine what the situation is?”

Barbieri is an example of the scientific illiteracy that permeates the anti #abortion movement https://t.co/FaxPWQXqeT #Prochoice is #prolife

“Prior to asking if women’s vaginas are somehow connected to their digestive tracts, Barbieri was holding himself out as extremely knowledgeable about the practice of medicine,” explains Amanda Marcotte of Slate. Although experts agree that telemedicine abortions are perfectly safe, the goal of Barberi’s question was to justify banning the practice on medical grounds by arguing that “there are certain examinations and procedures which require personal hands-on exams, and I think this is one of them.”

Hence the problem, as Kate Brown of Jezebel pointed out, is that while men like Barberi clearly possess a poor understanding about how women’s bodies work, “these exact idiot men get to make medical decisions on behalf of women.”

Tara Culp-Ressler of ThinkProgress summed up the online reaction pretty perfectly when she wrote that  “the GOP lawmaker, who sits on the board of a right wing ‘crisis pregnancy center’ that works to dissuade women from choosing abortion, added that ‘this is a proper role of government to protect life,’” even though “research into Iowa’s telemedicine abortion program has found that there’s no difference between women who are prescribed the abortion pill in person versus the women who consult with a doctor remotely. Surveys among the patients who have used the service report low rates of complications and high levels of satisfaction.”

Of course, this isn’t the first time a Republican politician has gotten himself in trouble by failing to comprehend basic human biology. Perhaps the most notorious instances occurred during the infamous “War on Women” from the 2012 elections, when two GOP candidates for the Senate made similarly offensive comments about rape and abortion rights in short succession. It began in August with Todd Akin of Missouri, who insisted that abortion shouldn’t be legalized in cases when the pregnancy was due to rape because “if it’s a legitimate rape, the female body has ways to try to shut the whole thing down.” Richard Mourdock of Indiana joined Akin in the Republican Hall of Shame a couple of months later when he argued that “even when life begins in that horrible situation of rape, that is something that God intended to happen.”

Although both candidates went down to defeat in their subsequent elections (which had been considered winnable for each of them), their commentary is often used as the go-to example of conservative men making decisions about bodies they quite literally don’t fully understand.

That said, these are far from the only examples out there. In his congressional campaign against Tammy Duckworth in Illinois, Republican Rep. Joe Walsh claimed that there was no need for abortion being allowed if the life of the mother was endangered because “with modern technology and science, you can’t find one instance” in which the mother would die. John Koster, a Tea Party darling who was a Republican candidate for Congress in Washington State, got in trouble for dismissing “the rape thing” by arguing that “it’s like, how does putting more violence onto a woman’s body and taking the life of an innocent child that’s a consequence of this crime, how does that make it better?”

As recently as last week, a South Dakota Republican lawmaker named Isaac Latterell introduced a bill making it illegal for a physician to “knowingly behead a living unborn child with the intent of endangering the life or health of the child,” which is a grossly inaccurate description of dilation and evacuation (D and E) abortion procedures. (The bill’s language also makes you wonder how someone could behead a living creature without knowingly endangering its life.)

In the end, politicians from Akin and Mourdon to Latterell and Barberi are united in two fundamental ways: They’re both right-wing lawmakers who wish to pass policies controlling what women choose to do with their bodies, and they both display a shocking lack of knowledge about how those bodies actually work.

Of course, this doesn’t mean that there aren’t female right-wingers who are similarly uninformed (see Texas Rep. Jodie Laubenberg’s claim in June 2013 that abortion shouldn’t be allowed in cases of rape because “they have what’s called rape kits where a woman can get cleaned out”). At the same time, there is something distinctly galling about hearing male politicians pontificate about the medical and moral implications of a procedure that they will not only never have to consider having themselves, but which they frequently fail to even comprehend on the most basic conceptual level.

It is impossible to understand why this happens without contextualizing it within the framework of male privilege. In a 2013 report published in Psychological Science, researchers Ashleigh Rosette of Duke University and Lehigh Plunkett Tost of the University of Michigan observed that one of the defining characteristics of male privilege is callousness. Rosette and Tost hypothesized that “if you occupy a historically marginalized position (being a woman or African-American, for example) and a dominant group (e.g., an executive team) on another, the more you’ll be aware of social inequities in that dominant group,” as the Association for Psychological Science reported about the study. “But that awareness, they posited, could be dampened the higher your level of success in the dominant group.”

In other words, the reason so many old white men are capable of making asinine or even bafflingly inaccurate remarks about women’s bodies isn’t simply that they aren’t women but that they don’t feel any strong imperative to empathize with a woman’s point of view. As such, when they approach issues like abortion and contraception coverage with a pre-existing conservative perspective, they view the inevitable discussions of female biology as obstacles to be overcome en route to making their argument. Playing fast and loose with the basic facts on such a subject—as Barberi tried to do with his attempt at a “gotcha” question at the expense of a qualified doctor, his subsequent denials to the contrary notwithstanding—is easy when you’ve already disregard the potential relevance of the women’s experiences in these matters.

If there is one picture that can best sum up the problem facing old white men today as they attempt to shape the politics of women’s bodies, it is a shot from nearly a dozen years ago. When George W. Bush met with congressional leaders to sign the Partial Birth Abortion Ban of 2003, many pundits noted the irony: The picture is filled with middle-aged and elderly white men, standing side-by-side and grinning ear-to-ear, as they use the strong arm of the law to make a decision that will impact countless women. One doesn’t have to question their good intentions to be disgusted at their obliviousness.

Such is the lesson we’ve learned again this week, courtesy of Vito Barberi.