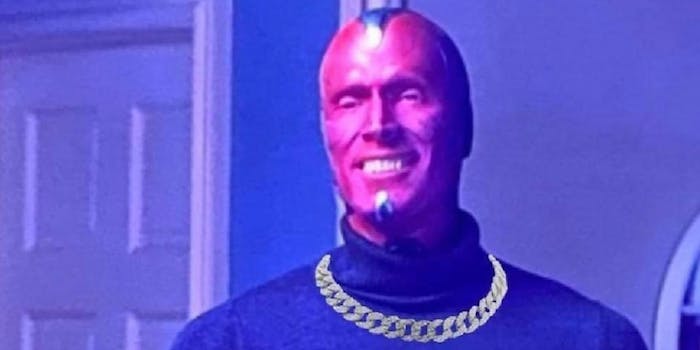 Vision, or “ViShawn” as he’s now known among memers online, from the Marvel Cinematic Universe TV show WandaVision, earned himself the Black Twitter treatment following the Disney Plus series’ airing of its season finale on Friday.

The show revolves around superhero soulmates, Wanda Maximoff and Vision, in a strange alt-version of suburban America, in fictional Westview, New Jersey. It begins three weeks after the Avengers’ classic battle with Thanos in Endgame.

The season finale drew a diverse array of emotions and expectations. Many were thoroughly satisfied with the bombast and twists, and some wished for even more action.

But the major takeaway, aside from the show itself, is a still of Vision (Paul Bettany) being recast on Twitter as “ViShawn,” a name/meme coined by author and Marvel fan Brandon Pope.

Of course, the meme has evolved ever since Pope’s tweet on March 7. “‘My brotha it’s all in the eyes of the beholder, why you think they call me vision,'” @buki_loco jokingly imagined ViShawn saying.

Many are now wondering if Paul Bettany is aware of the memeification of his character and if he finds the memes humorous. “I for one cannot WAIT for Paul Bettany to find out about Vishawn J’Arvis Maximoff,” one user wrote, including ViShawn’s “middle name” as well.

Either way, the memes are a boon for the show, and a sign than the series has gained traction across numerous demographics.

“Vishawn is exactly the type of thing I try to explain a brand simply cannot do,” @JasmynBeKnowing pointed out. “You just have to hope something like that pops off during your campaign.”