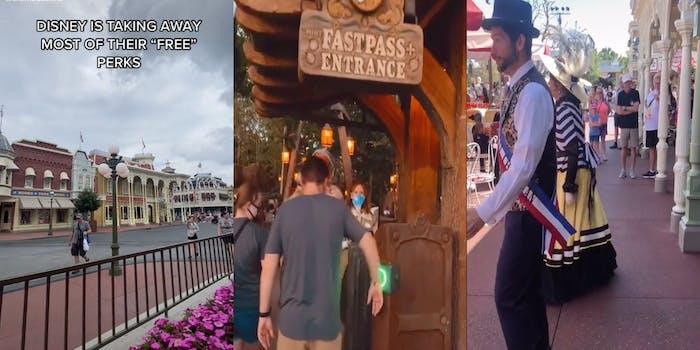 'Why would any of us pay the outrageous hotel prices if there’s no perks?'

The TikTok, posted by Disney fan account @themouselets, has received over one million views and over 2500 comments. The Disney fandom is not happy.

TikTok user @vlades wrote in a comment on the video, “Disney is slowly becoming less accessible to the middle class.”

“Why would any of us pay the outrageous hotel prices if there’s no perks?” user @greencaulifower asked.

According to the Mouselets, on-site guests used to receive a free “magic” wristband, secure all-in-one devices that allow guests to access their FastPasses, plans, and vacation choices. Now, the wristbands must be purchased at an additional cost starting at around $29.99.

Additionally, for years, guests could take the Magical Express, a complimentary motorcoach for Disney Resort hotel guests shuttling between Orlando International Airport and Disney Resort hotels. According to the DisneyWorld website, the service will no longer be offered starting Jan. 1, 2022.

Furthermore, Disneyland Paris recently announced that its FastPass system will no longer be free. The U.S. parks have suspended their FastPass program “for the time being” due to COVID-19 but have yet to announce a future upcharge. This is according to the DisneyWorld and Disneyland websites.

Insider reported on July 8 that Disneyland Paris will now charge visitors up to 15€ ($18) for Fast Passes if they want to skip ride lines. A new free service called Standby Pass, which virtually holds your spot in ride lines while you walk around the theme park, is also being introduced.

The last “free perk” the Mouselets mourned was the plethora of live entertainment options at the parks. During the pandemic, Walt Disney World let go of hundreds of actors, according to the Orlando Sentinel. It does not appear that the company as hired them back yet.

TikTok viewers were especially disappointed at this announcement.

“Half of the point of coming to Disney is for the live entertainment otherwise it becomes like any other amusement park they’re really messing up here,” user @ewifey commented.

User @Hailey_Vogel1775 said, “This all makes me sad. Like it just keeps losing its magic. Like I’m really mad about the live entertainment.”

Disney did not immediately respond to the Daily Dot’s request for comment.