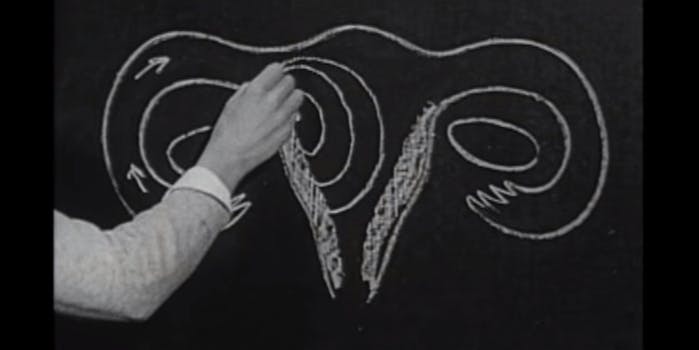 Are you there, Internet? It's me, puberty.

Puberty is a great time, and periods are loads of fun. No one can disagree with that. But what’s even more enjoyable than blood running down your leg before you have time to tape a lady-diaper to your stained underpants or shoving a raspy tampon up in yer delicate tissues?

Back in the dark ages, before you could just Google “uterus” and have 20,000 illustrations and frighteningly graphic medical photos pop up, teens had to endure flickering 16mm films and static-filled VHS tapes about menstruation and puberty in sex education classes. You’re probably also wondering what sex ed class is, since conservative politicians have since done away with those in over half of U.S. states. Luckily, the internet has preserved much of the material used in those classes in the past.

Googling breasts and balls is a treat—but watching vintage movies in which lost little kids have puberty explained to them by weird adults is a special kind of amazing. So here’s a comprehensive list of eight vintage health class films about menstruation and sex that you can watch online, for laughs.

This fun little number starts off with baby animals, then goes straight to sporty girls playing sports as they “prepare their bodies for motherhood.”

Best line: “The vagina is the opening between the front passage, or bladder, and the back passage, or rectum.” Sexy.

So there’s this aging stoner named Johnny, and he likes bowling, and there’s this 15-year-old girl named Judy, who usually sucks at bowling, but she likes brownies, milk, and trash cans—and that’s how periods happen, folks! Warning: this movie has trippy animation (and adult actors playing teenagers), and it’s recommended to watch it while on drugs.

Best line: “I should have known something was different as soon as she got a strike.”

Fans of the Netflix show Stranger Things will appreciate this ’70s puberty film, laden with zooming fonts and girls dancing around in blackened rooms that appear to have no edges. And who doesn’t love a good old-fashioned sanitary belt?

Ever wonder what Leave it to Beaver would be like if the show centered on a little girl’s impending menstruation? Well, we have too—and our prayers were answered with this program. There’s a lot of “golly” and “gee, ma” between discussions of whether or not to go swimming when you’ve got “the curse.”

Best line: “If you sit and stand straight, that will give the organs inside your body room to function better. And that will make you feel better.”

Walt Disney’s The Story of Menstruation

Even Disney Princesses get crippling cramps. No, really. Disney produced this animated explainer on Aunt Flow for Kotex, and it was shown in health classes around the nation—where girls learned not to lift heavy furniture while on the rag, and that brushing your hair can cause nervous breakdowns.

Great for fans of droning British accents, this movie is guaranteed to help insomniacs fall asleep. It’s shot at some sort of all-girl country boarding school that looks like it would be more fun if it were haunted. Also, apparently, in the 1950s, there were special desks in department stores where nicely dressed ladies sold brown paper bundles filled with menstrual pads.

Best line: “Soiled pads should be wrapped in paper at once and burnt.”

What is Menstrual Period?:

This old film from India is highly enticing on YouTube because it’s billed as a “Bollywood” sex ed movie. Sadly, there are no choreographed dance routines to be found. But the soundtrack that plays over animations of a shedding uterine lining is cool in a prog-rock, synthesizery kind of way.

Best line: None of this film is in English, but it’s pretty clear that they’re talking about periods.

This Australian video intersperses documentary footage of a real classroom full of Aussie girls talking about periods with totally sci-fi animations of glowing space bodies sending out beams of light. It’s very 1980s, and there are a lot of sports involved for some reason. Be prepared to hear a heavily accented discussion of “ee-strogen” and (again) the soundtrack of Stranger Things playing throughout.

Best line: “[Tampons] are positioned in the central part of the vagina where there are few nerve endings, so they can’t be felt.” Um, no.

Hope that clears things up!