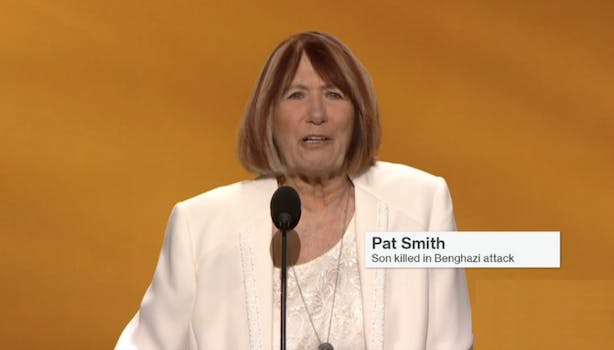 A well-known Something Awful moderator’s mom spoke at the RNC, and things got weird

A very strange circle was completed at the Republican National Convention on Monday when the mother of one of the Americans killed in the 2012 Benghazi attack took the stage to personally blame Hillary Clinton for her son’s death.

Patricia Smith’s son, Sean Smith, was a Foreign Service Officer who had been temporarily stationed in Libya and was killed in the infamous attack on the U.S. embassy in Benghazi. He was also a well-liked forum goon and moderator on Something Awful, a comedy website that’s helped define the internet’s sense of humor for more than a decade.

And back in 2009, Sean (who went by Vilerat on SA) started a thread titled “Got a crazy forwarded political email from your family? Post them here.”

The crazy email forwards he personally contributed included one entry praising Arizona sheriff Joe Arpaio and another asserting that it was wrong to mourn Michael Jackson while American troops died overseas.

And some of those emails may have been from Vilerat’s mom. Allegedly, she was the inspiration that sparked the thread.

@RandoDaily @FUIWORK Something Awful inside baseball: sean smith started the “crazy FWDs from your family? post them here!” thread about her

SA Goons and Weird Twitter posters had mixed responses to Vilerat’s mom’s speech at the Republican convention. Is Pat Smith unhinged, and is her appearance at the convention another weird and awful joke that 2016 is playing on us all? Or is it only fair that she express her rage and grief over her son’s death?

It's depressing as hell they are using Vilerat's mom like this. https://t.co/BQp7ulytIR

It's kind of weird watching Vilerat's mom on stage at the RNC. Her grief and outrage are real, but she's being used as a cheap prop.

“I, uh, don’t think he would have voted for Trump, personally,” wrote one SA poster.

“if I knew Vilerat, and I didnt, Pretty sure he wouldn’t vote for either of these candidates, but I could probably convince him to vote for Trump, seeing as you know..Hillary got him killed an all,” another replied.

“I can only pray that one day I experience massive tragedy followed by the honor of being puppeted around by people who don’t give a shit about me,” added another, more cynically.

As for the question of whether Vilerat’s mom’s RNC speech is now the real life equivalent of a “crazy email forward,” opinions differ there as well.

In her speech, Pat Smith repeated what she’s told Fox News and others before: that Hillary lied to her face, claiming the attack that killed Sean Smith was incited by the controversial anti-Islamic video The Innocence of Muslims.

According to Politifact fact checkers, it’s not clear whether Clinton mentioned the video to grieving family members of Benghazi victims. Pat Smith maintains that Clinton did blame the film for the attacks, but members of other families who spoke to the then-Secretary of State don’t recall it ever coming up.

Politifact also concludes that even if Clinton had tied The Innocence of Muslims to the Benghazi attacks, to do so might not be an outright lie.

“A Libyan terrorist intimately involved in the Benghazi attack, who the United States has since captured, reportedly said at the time that he was partially motivated by the video, for example,” the site notes.

That’s probably not enough to convince the die-hard “Hillary For Prison” crowd. Then again, neither was the House Select Committee on Benghazi’s 800-page final report, which excoriated the State Department and Department of Defense for a lack of preparedness at the embassy but found no wrongdoing by Clinton herself.