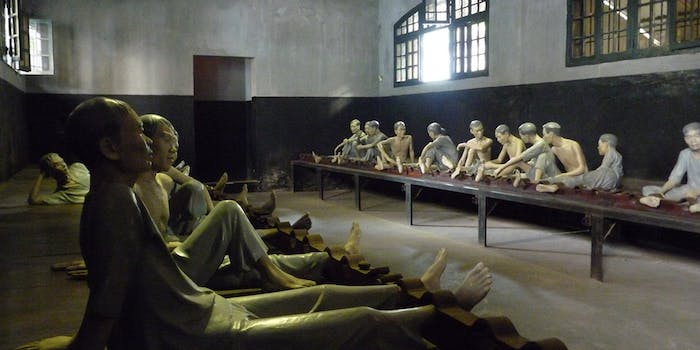 The country has been on a tear arresting bloggers, while one who's served five years is starving himself to death behind bars.

It takes around 60 days for a person to die of starvation. Imprisoned Vietnamese blogger Nguyen Van Hai, known online as Dieu Cay (“Peasant’s Pipe”) is more than halfway there.

Nguyen is on the 32nd day of a hunger strike to draw attention to the conditions in which he and other prisoners are being held. He has already lost an arm in jail and is in deteriorating health.

He was jailed five years ago. Since then, the Vietnamese government has gone on a veritable blogger jailing jag.

In December, Nguyen’s plea for leniency was denied, and he was ordered to serve all of his 12-year sentence for “conducting propaganda against the state.”

Fellow Vietnamese blogger Bui Thanh Hieu, known as Nguoi Buon Gio (“Wind Trader”) told Reporters Without Borders (RSF) about Nguyen’s health and how the man’s family has been forbidden to visit him in jail.

When Nguyen told a fellow inmate’s visiting wife that he was on a hunger strike, guards grabbed him, put a hand over his mouth and dragged him from the room.