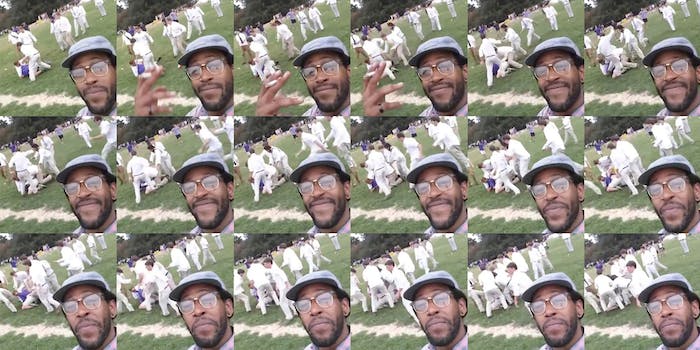 The epitome of smdh.

Sometimes a selfie is more than just a selfie; it’s a commentary on what’s happening around you at any given moment. One bystander at a LSU football tailgate captured the essence of “smdh” in a 14-second clip that made the rounds on Reddit in the past day.

The video, which was posted to Reddit with the title “When White People Fight,” captures several pledges at a LSU fraternity in an altercation with a single man in a purple shirt, who appears to run headfirst into the crowd and immediately incites a rumble. The video is shot selfie-style, and the cameraman’s face says it all.

Since going viral, the video has been deleted from YouTube “a violation of YouTube’s policy prohibiting content designed to harass, bully or threaten,” although we can’t figure out if it’s the fighters in the back harassing each other, or the uploader “harassing” the fighters by documenting it. Nonetheless, the Internet was able to preserve it before it disappeared forever.

Come, shake your damn head with us.