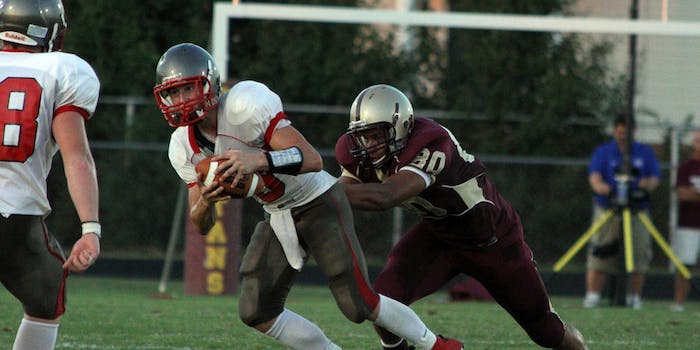 You won't believe the final play of this Utah high school football game.

Play until the final whistle blows. It’s a mantra repeated by every football coach, and one that Spanish Fork High School’s quarterback, Jason Money, forgot. It cost his team a trip to the playoffs.

You can watch the full game to get the full effect, or you can skip straight to the 46-minute mark.

The Spanish Fork Dons were leading the Maple Mountain Golden Eagles 14-11 in a Utah Class 4A state play-in game. With 3.7 seconds left in the fourth quarter, all Money had to do was snap the ball, run out the final few seconds, and take a knee or give himself up. Or even take a sack. Or just trip over his own laces and fall to the turf. All he had to do was not turn the ball over and Spanish Fork would advance to the postseason.

Money scrambled out of the pocket successfully, running out the remaining time from the clock. But then—seemingly thinking that like basketball the game is over once the clock goes down to zero—he stopped scrambling and dropped the ball on the ground. Maple Mountain senior defensive back Brandon Beebe immediately scooped it up and with the clock showing all zeroes, returned the football 25 yards for the game-winning score. It was the Golden Eagles who moved on to the playoffs.

It might have been the last play of my career,” Maple Mountain senior defensive back Beebe told KSL.com. “I might as well give it my all, and I did just that. It was a good play.”

As for Money, the junior QB will be fine: He’s an NCAA prospect that’s drawn recruiting interest from national brands.

Play until the final whistle—those words have never rung truer.

Photo via Mike Pettigano/Flickr (CC BY 2.0)