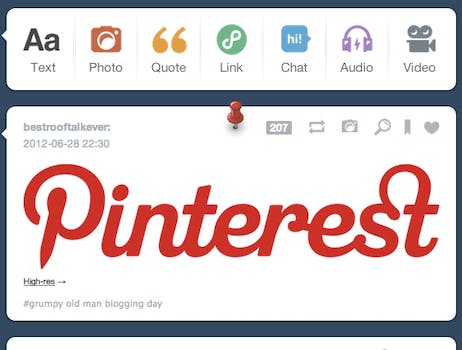 New ad service allows a blog you follow to "pin" their post to the top of your dashboard for one day.

Tumblr’s latest feature is an advertiser’s dream. But to regular users, it sounds like spam.

On Thursday, the blogging social network rolled out its latest ad product, which allows Tumblr users to literally pin content to the top of every follower’s dashboard for 24 hours for $5 a post. Followers can choose to unpin the post from their dashboard at any time.

The ad product is a slightly more expensive, slightly more invasive version of February’s Highlighted Posts, which for $2 allowed Tumblr users to make their own posts more noticeable. It is also the fourth ad-focused product Tumblr has released this year, Mashable reported.

Since Thursday, users have posted their reactions to the new product. Few are satisfied.

“This is about as annoying as pop up ads. I am not at tumblr to have content forced on me,” villaincafe wrote.

“To my followers: with over six million blogs to follow, you probably wish to see something other than my pet post at the top of your dash. That’s why I will never, ever do this to you,” imall4frogs wrote.

steweboyd wished pinned posts reflected content he, not its creator, thought was valuable.

“It would be better if a post became pinned because a lot of people liked it, or was based on some other emergent property, not just payola,” he said.

At least one Tumblr power user, however, took Tumblr’s side. Nick Divers of Best Roof Talk Ever thought it could be worse:

“Outside of some bullshit facebook page adspace, this is the first time that a social network has helped their base (in this case, the content-creators) better highlight their own work for their own audience,” he said.

Tumblr has become increasingly ad friendly, but as Divers points out, these ads are put out by bloggers, not third-party advertisers.

What do you think of pinned posts on Tumblr?