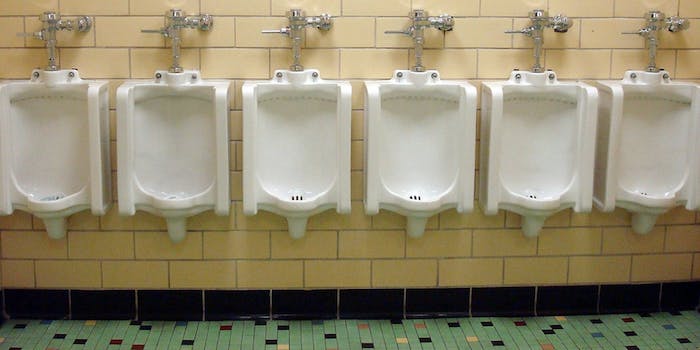 Finally men can pee in peace, thanks to new urinal privacy cape

For the man with bathroom stage fright.

Everybody thinks the men’s bathroom is a non-stop party, and to a certain extent, that’s 100 percent true. But not all men are into the overwhelmingly social atmosphere of the public john. In fact, sometimes fellas can be straight-up insecure, especially at the urinals.

Thankfully, there’s Privi-Pee, the “invisibility* cloak” by British bathroom retail website Plumbworld, for men who need to use a public urinal but don’t feel like talking about the big game or crossing streams. It’s easy to use, too! Though it looks like the boys at Plumbworld thought of that, too. Suction cups are affixed to the cape and cling to the wall, creating a tent around you, your manhood, and the urinal. And the man who’s feeling extra broody and antisocial can just throw that stylish hood over his head. Now you can RSVP to the 24/7 bathroom party with a stern “NO WAY” while getting the relief you deserve with Privi-Pee!