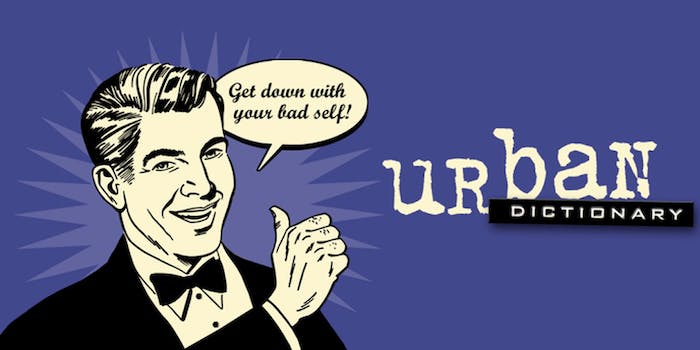 Urban Dictionary has become a resource for out-of-touch courts to quickly and cheaply find definitions of slang terms.

The crowd-sourced dictionary of “urban”* language, that font to which we all repair when seeking the definitive definition of “badonkadonk,”** the Urban Dictionary, has been sworn in in a court of law.

The Urban Dictionary, cobbled together by a college freshman back in 1999, “was cited in a financial restitution case in Wisconsin,” in April, according to the New York Times, “where an appeals court was reviewing the term ‘jack’ because a convicted robber and his companion had referred to themselves as the ‘jack boys.’”

Several weeks prior to the Wisconsin case, the dictionary was also consulted in a sexual harassment case in Tennessee.

It takes a while before a word is added to standard dictionaries. The Urban Dictionary was designed to bridge the gap between the street and the hallowed halls of the lexicographers.

It addresses the development of slang terms, which appear early and often, and few of which ever become permanent, standard parts of speech, thereby qualifying them for inclusion in the Oxford English Dictionary or Merriam-Webster.

The use of the Urban Dictionary in court cases is likely to increase, according to Rutgers law professor Greg Lastowka, who told the Times, “If it is Urban Dictionary or hire some linguistic expert to do a survey, it seems like a pretty cheap, pretty good alternative for the court.”

“In the last year alone, the Web site was used by courts to define iron (‘handgun’); catfishing (‘the phenomenon of Internet predators that fabricate online identities’); dap (‘the knocking of fists together as a greeting, or form of respect’); and grenade (‘the solitary ugly girl always found with a group of hotties’).”

If this sounds familiar, and silly, it might be one of several reasons. Crowdsourced reference resources can be very useful, but they have also been repeatedly decried as unreliable. Take Wikipedia’s high-profile incident in which writers on that crowdsourced encyclopedia called American journalist John Siegenthaler a suspect in the assassination of President John Kennedy.

The other problem is the New York Times itself. One of the most celebrated, and hilarious, incidents of a journalist getting pranked was when reporter John Marin, in his long 1992 style feature on grunge culture in the Northwest, published a glossary of grunge terms.

There was no such thing as grunge slang. But that didn’t stop a Sub Pop Records sales associate from furnishing Marin with a luxuriant list thereof, including such phrases as “harsh realm,” “wack slacks” and, most operatically of all, “swingin’ on the flippity-flop.”

So between the unreliability of crowdsourcing and the Times’ track record of pitching standard journalistic practice out the window when covering anything west of the Hudson, you might want to take this account with a grain of salt.

But the notion that its contributors are now going to take every opportunity to fill the dictionary with hangin’ with the flippity-flop style nonsense in the hope that they hear their preposterous contributions intoned by an attorney on Court TV with the same gravitas that Tipper Gore lent to the lyrics of Twisted Sister or Joe Lieberman did to Dove Shack?

The mere idea is, to borrow a term from the Urban Dictionary, “tang.”***

*This is newscaster code for black

**”Only used when describing bitchs”