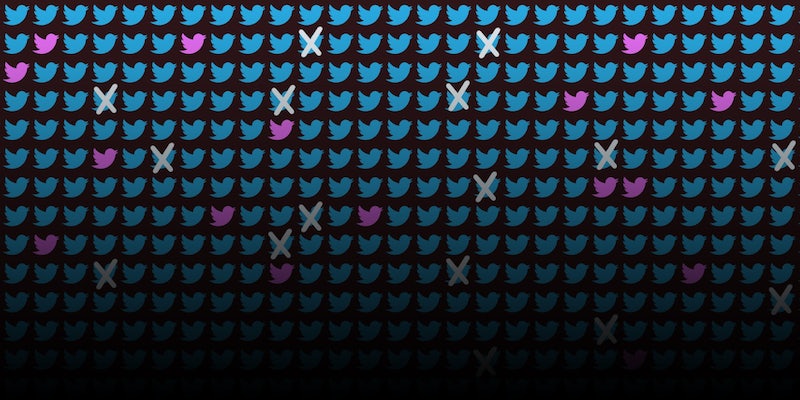 One man’s humble endorsement of #UnfollowAMan

Men: Have you ever actually tried to follow one on Twitter? It’s the worst. I know because I’m (technically) a man, and I post absolute garbage. Luckily, women have started to notice.

Today is #UnfollowAMan day. Choose one man in your timeline you don’t want to listen to anymore and unfollow.

This hashtag is quickly becoming the flashpoint for a vital movement against male hegemony over a medium that’s more than 50 percent female, at least in the United States.

men: if you volunteer yourself for unfollowing you are doing a service for your district #unfollowaman

I want to emphasize that this endorsement is in no way tongue-in-cheek. Nor do I hope to score points with women. This isn’t even about my persistent and traitorous mid-level nausea for my own gender. I love #UnfollowAMan because it exposes sick men.

I say “sick” because you’d have to be to imagine yourself threatened or your rights somehow infringed in a broader campaign of institutional oppression because an editor at BuzzFeed knows how to push your buttons. Feminist trolling isn’t an Orwell novel, dude. (Neither is your favorite Louis C.K. punchline about vaginas.) 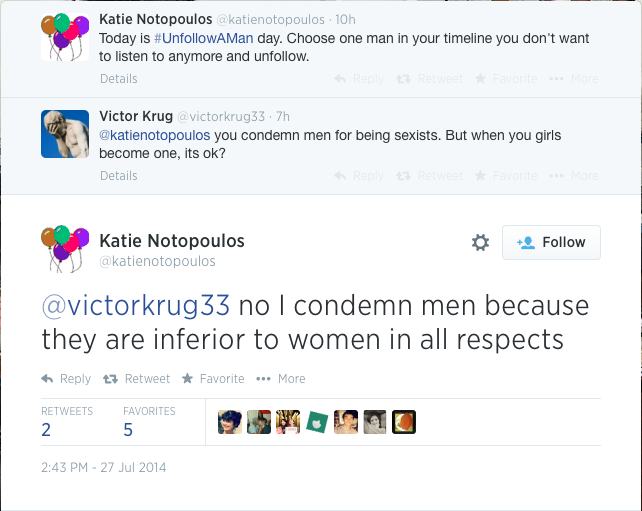 At various points in American history—the emancipation of slaves, the suffragette era, and the 20th century’s civil rights fights—white men with the power and disinclination to change the system got it into their heads that those without the vote or equal protection were the ones in control of the country. Victimhood, they began to believe, was the true source of influence and political capital—as if grievances are what give you a majority in Congress.

But #UnfollowAMan doesn’t just enrage men’s rights activists. By tossing a provocation out around which they’re bound to circle the wagons, women effectively distract them from their usual online misogynist activities. You can’t send unsolicited dick pics, call a stranger a slut, or joke about domestic abuse when you’re busy shaming ladies for a cheeky protest.

Remember when feminists fought for real issues like right to abortion? Today its reduced to moronic twitter “activism” #unfollowaman

Has someone taken the concept too far? Someone always will. We could argue all day about where to draw the ideological line on this one—and welcome to the Web, by the by. For the most part, however, male (and even female) engagement with #UnfollowAMan underscores a paranoia of persecution oddly prevalent in a demographic that rarely hesitates to say “get over it” when justifying sexist humor, clichés, and generalizations.

My follower count’s down by almost 2000 today. #UnfollowAMan is killing my brand. I doubted, but Misandry is real, & it’s crippling my Klout

Unfortunately for anyone preparing to angrily comment on this op-ed—not that I expect you’ve read this far—there’s no way to do so without describing your own laughable irrelevance. Likewise, unfollowing me on Twitter fulfills the very promise laid out by #UnfollowAMan. But please, have at it. Better to have you ranting here than bitterly Facebook stalking an ex-girlfriend. And after all this unfollowing, I could use the company.