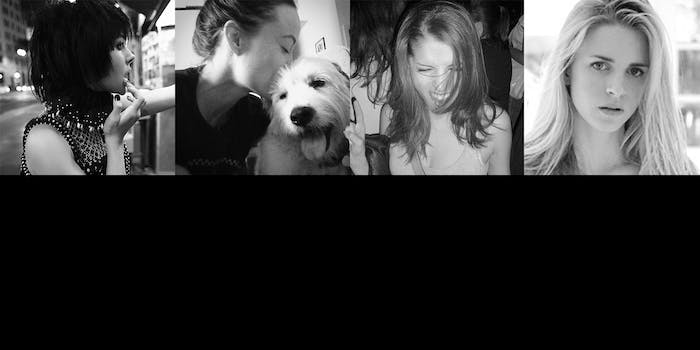 She’s not a Brit, but Danny Boyle casted her anyway for his new TV show Babylon, which begins with a fake TED Talk in episode 1 where Ms. Marling pretends she’s Head of Communications at Instagram. Then London’s Metropolitan Police hires her to run their fighting PR force. This actress’ tweets reflect distress and high duress, which ought to make people unfollow her twice even in one week, only to avoid the urge to report her account. In each of these following tweets, for instance, one can see a very problematic favorites-per-retweets uncrunched ratio, as she always gets more than double the favs for every RT. Bummer.

The dimensions of your eyelashes keep me awake at night

Friends call her Anna Kendrick Lamar Odom. She was all over NY Fashion Week, according to country music pal @carrieunderwood. The problem with this Kendrick is her bio-line on Twitter, where she apparently plays the short-shy victim card, calling herself “Pale, awkward and very very small.” That is a lie. She isn’t that person at all IRL, as her dwindling 2 million followers know. She’s pushy, relentless and tough. Plus her cover pic is a bit alarming, as its obvious that Kendrick has nothing to do with lighthouses and surrealness. Also I spotted an acute graphic issue: The letters of her first name conflict with the structures on the shore. White on white.

A favorite moment at #NYFW was @AnnaKendrick47 telling the photographers to “be cool!” and “act normal!”

Keeps tweeting injury reports and boring obituaries for someone called Shirley (did Shirley MacLaine die?). Main reason to unfollow this actress, though, just like the previous one, is her color scheme. She chose to have hashtags and links painted pink which doesn’t go well with her white background. Race-wise, Moretz is openly white and has an umlaut, but Twitter graphics-wise her posts are just physically unreadable. Soz.

Not sure about her husband choice, @jasonsudeikis (unverified). Sadly, he is nowhere near her, followers-wise. He never even tweeted, and follows just her and two other family member of his. Babe, never marry someone who’s got less followers than you. So basic. Can’t believe Olivia had done that so carelessly. One’s allowed to get engaged with 30K+ people, sure, but if the bride or groom has 2 million followers more than their spouse, its offensive. Plus, Wilde once tweeted a blank FB link that didn’t open into a thumbnail. Shows weakness. If I want to leave Twitter to get your references, you’re done. Then I unfollowed her publicly and she took it too well. Irritating.

Photos via Twitter/Illustration by Jason Reed