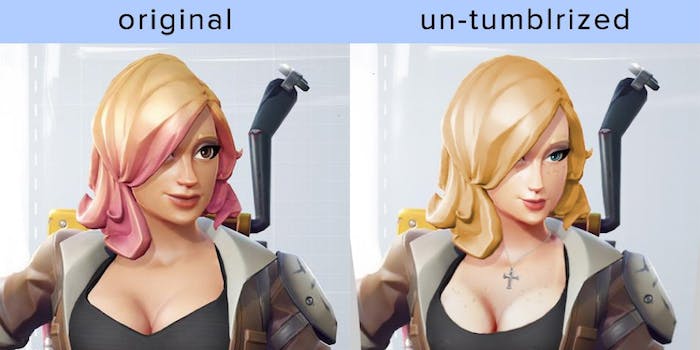 This attempt to make game characters 'hotter' ended up getting roasted.

When a 4chan poster shared his redesign of a female character from the game Fortnite, he may have known he was starting a new meme. He probably didn’t realize it was going to be a joke at his expense, though.

His reimagining of the character Tank Penny is supposed to be “Untumblrized” or “un-tumblrized”—free from the liberal, inclusive politics that some gamers claim are “ruining” video games. Apparently, that means making women thinner and whiter. And don’t forget removing their colored hair highlights and issuing them cross necklaces, for some reason.

The now-infamous Tank Penny edit was originally posted to an “Anti marxist video game thread” on 4chan back in 2017. It didn’t get much mainstream attention until a popular tweet this year called out how absurd it was.

imagine thinking that a character who actually looks realistic is “Tumblrized” pic.twitter.com/uM9r79GVwy

The post implies, without evidence, that the character design has been somehow corrupted by a Tumblr-driven demand for more realistic female bodies in video games. That’s an uncontroversial opinion within the gamer-friendly confines of 4chan, but once the “untumblrized” image escaped to the wider world, it got roasted.

As you might expect, some of the best jokes have come from Tumblr users:

Now there are many more mocking parodies of the “untumblrization” movement than genuine examples. In fact, dunking on the concept has become a meme:

And, in the process of making a point, a lot of meme creators have managed some funny callbacks to early memes. Here’s a good Ben Swolo shoutout:

And here’s a Virgin vs. Chad version, which is especially funny because it turns one of 4chan’s own favorite memes against itself:

It’s clear from all these examples that Untumblrization, as its creator intended it, is not a thing. It even backfired as a tactic for trolling Tumblr users, because they ended up having tons of fun with it. Untumblrization as a satire of 4chan’s key demographic—young, conservative, Pepe-loving “shitlords” who use “Social Justice Warrior” as a slur—is now real, and it’s extremely enjoyable.