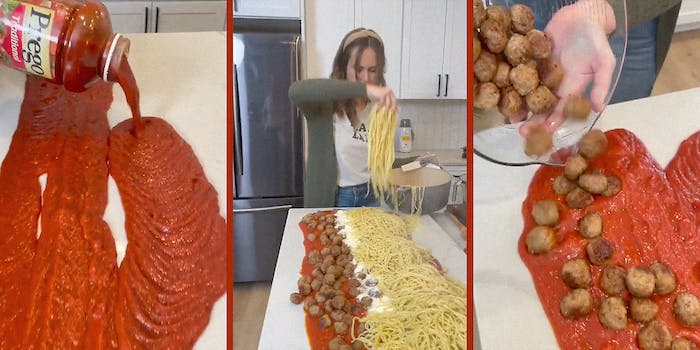 'I sure as h*ll didn’t survive a pandemic just to risk it all for Prego sauce on someone’s nasty a** counter.'

A popular Facebook page—that posts a combination of prank videos and cooking videos viewers can only hope are pranks—posted a video at the end of April that has people online are grossed out.

The Facebook page of “Lisa and Josh” posted a video featuring Lisa pouring a cold jar of traditional Prego sauce directly onto a countertop.

“This is the easiest way to make spaghetti for a crowd, and it’s fun,” Lisa says in the clip while dousing the counter in the red sauce. “You don’t have to worry about dishes, or a mess—or anything like that.”

Lisa then tops the sauce with meatballs. “We do this all the time,” Lisa says.

Lisa then uses her hands to plop the noodles on top of the sauce before mixing all the ingredients together with a large wooden pair of serving forks, sans mixing bowl. “How delicious does this look?” she questions. Lisa, who says she’s Italian, also claims that “this is how real Italians” make spaghetti. Lisa throws some salad and bread onto the table as the finishing touches.

The page called it the “ULTIMATE SPAGHETTI TRICK!!” in the caption of the video.

People on Twitter specifically just apparently discovered the video’s existence, leading to “Prego” becoming a trending topic on Tuesday. “I sure as hell didn’t survive a pandemic just to risk it all for Prego sauce on someone’s nasty ass counter,” one Twitter user said after watching the video.

“Everything about the video is a culinary crime against humanity,” another said.

Some Prego haters were not all that surprised by the technique. “Actually how I always assumed people who consume Prego would make spaghetti,” one user joked.

Users also hit back at Lisa’s claim that this is how “real Italians” make the dish, with one Italian saying that they’d “like to report this as a hate crime.”

“Prego from a plastic bottle slathered across a table: just like every single Italian grandma used to make,” another joked.

Josh and Lisa are no strangers to going viral for videos featuring their countertop dishes. In the past, the Facebook users have posted videos featuring everything from nachos to mac and cheese.

And other social media users have similarly gone viral for their own tabletop concoctions. Their spaghetti video is, unfortunately, resurfacing some of these clips. “You thought the spaghetti prego video was bad? Wait until you see the taco vid,” one Twitter user said on Tuesday.

The Daily Dot has reached out to Lisa and Josh.