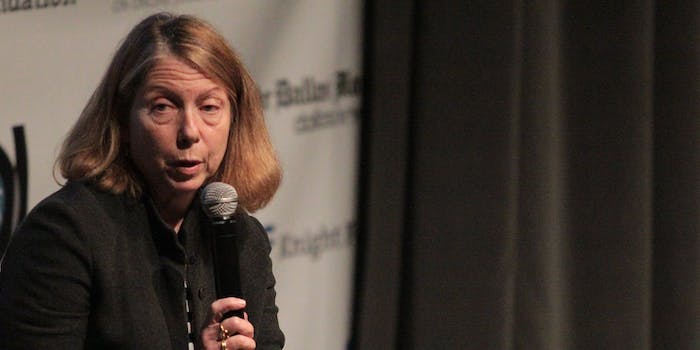 A partnership with the Guardian over the NSA leaks brought some unwelcome attention.

In August, New York Times Executive Editor Jill Abramson accepted an invitation from U.K. newspaper the Guardian to collaborate on combing through secret files leaked by whistleblower Edward Snowden—reprising a professional partnership forged over WikiLeaks material in 2010. Not long after, Abramson revealed yesterday in a Guardian interview, someone from the British embassy came knocking.

“They were hopeful that we would relinquish any material that we might be reporting on, relating to Edward Snowden,” Abramson explained. Particularly sought after were leaked files that revealed activities of the Government Communications Headquarters (GCHQ), Britain’s version of the NSA. But the unnamed official went home disappointed. “Needless to say,” Abramson remarked, “I considered what they told me, and said no.”

The encounter is a striking example of how governments on both sides of the pond have moved to suppress or otherwise control the flow of state surveillance data collected in the name of the war on terror. Abramson was adamant that the embassy not determine what the Times made public about the NSA or its influence over the GCHQ, though as the Guardian notes, the newspaper has submitted to White House pressures on occasion.

“Within the U.S., the Obama administration has asked on several occasions for the New York Times to consider withholding certain information from its stories, and the paper always gives sober consideration to the requests, she said, based on a careful assessment of the possible damage to national security accruing from publication. ‘Our default position is usually to weigh on the side of informing the public.'”

Beyond bargaining with the Times directly, the Obama administration has been attacking leaks at their root, prosecuting whistleblowers with an aggression that harks back to the Nixon era. With it that much more dangerous to become a source, a chilling effect on journalism is inevitable. It’s a lot easier to intimidate outspoken individuals than the gray lady.

H/T The Guardian | Photo by UTKnightCenter/Flickr