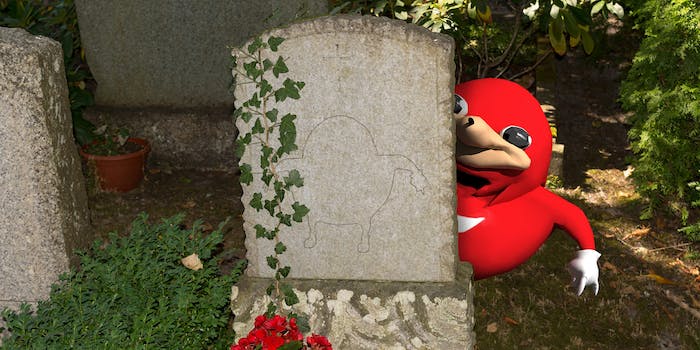 Ugandan Knuckles probably isn’t making a comeback, and that’s for the best

If you’ve seen a fat red cartoon animal online asking if “u know dey way” and thought “what the hell is this?” you’re not alone. What you’ve experienced is Ugandan Knuckles, a meme that went from goofy to racist in a tragic tale that could only make sense in a world of modern memes. Ugandan Knuckles was all over the place this time last year but seemed to slowly disappear after being repeatedly called out as racist. Now it might be making a comeback, mainly based on users who are trolling people who are critical of the meme.

To understand all of this, you have to get that memes are a slippery fish. Every time you think you have a hold on one, they wiggle away from you. This is, of course, the nature of memes. They change and evolve and, as soon as they stop, they’re dead. It’s great fun, especially if you enjoy things that confuse the hell out of your grandfather at holiday dinners, but it also means that memes sometimes take unfortunate turns. Turns their creators never intended and didn’t want.

Pepe the Frog is the poster child for this kind of tragedy. Pepe was created in 2005 by artist Matt Furie for his comic Boy’s Club. It was just a wacky comic about some teenage monster pals hanging out. For years, Pepe was a reaction meme used by everyone from Nicki Minaj to Katy Perry.

But things went south in 2015 when then-presidential candidate Donald Trump tweeted a picture of himself as Pepe.

From there, the poor frog became a symbol of the Alt-Right. Despite the efforts of Pepe fans, and his creator, Pepe has never truly come back from the dark side. Today, he currently resides on the Anti-Defamation League’s list of hate symbols, along with swastikas and Klan robes.

Has the same fate now befallen Knuckles the Echidna, a minor character from Sega’s Sonic the Hedgehog game series?

Knuckles has been around since 1994’s Sonic the Hedgehog 3, but it wasn’t until February of 2017 that we were introduced to the version of the character that would become Ugandan Knuckles.

A YouTuber who goes by Gregzilla posted a video review of Sonic Lost World, which showed a parody version of Knuckles. The pudgy little red guy is onscreen for less than a second but still developed a fanbase.

To understand how a dopey throwaway version of an already minor video game character became a dividing force on social media, you have to know about Twitch. Twitch is kind of like YouTube for video games, although one major difference is that there is an emphasis on live video streams. People stream live videos and commentary of themselves playing various games. As you might imagine, there’s a fair amount of juvenile humor, but that’s also part of the fun.

Unfortunately, this humor sometimes manifests as racist jokes. Whether the kids playing these games actually harbor racist beliefs or just enjoy anything that pisses people off is open for debate, but what you need to know is that fans of the Twitch streamer Forsen often use fake Ugandan accents and phrases while playing and talking about the first person shooter Playerunknown’s Battlegrounds (PUBG).

One such phrase is “I know Dey Way” or “Do u know dey way?” which most likely comes from 2010 Ugandan action-comedy movie called Who Killed Captain Alex. It was reportedly made for around $200.

Okay, so how did these entities get merged into one? We’re getting there, my friends.

Back in September, an artist on Deviantart created a 3D rendered model of Gregzilla’s version of Knuckles. This allowed anyone to use the character as an avatar in places like VRChat, which is a virtual reality chat room, somewhat similar to Second Life.

No one knows for sure who combined the distorted version of Knuckles with quotes from Who Killed Captain Alex and the fake accents. A YouTube video posted almost exactly a year ago shows one user who claims to have started the phenomenon with a few other people, but the authenticity of that claim is up for debate. What is known is that hordes of Uganda Knuckles started swarming VRChat. Trolling people and generally being as annoying as possible.

If you have an army of mainly white kids running around putting on fake African accents, it’s only a matter of time before people start calling out their behavior as racist, which is exactly what happened.

The meme spread across the internet and, as is common with memes, people were using it without knowing much of anything about its origin or context. For instance, gaming company Razer tweeted a now-deleted version of the meme and received severe backlash from Twitter users accusing the company of promoting racist images.

Eventually, the meme slowly faded away. Perhaps because of the accusations of racism, possibly in spite of them (the controversy certainly lead to a lot people hearing about it that would have otherwise been ignorant) or quite likely because that’s just what memes do.

But now the meme is making a small comeback, which seems to be based entirely on trolling people who called out its racist nature in the first place.

On December 16, a Reddit user with the not-exactly-progressive name PriusesAreGay posted a picture showing a dam holding back the Ugandan Knuckles. The image implied that the meme would be released at the beginning of the year on r/funny subreddit and would be making a huge comeback.

r/me_irl is planning to fire up r/funny with Uganda Knuckles on New Years. This one is coming back, buy now while it’s still cheap! from MemeEconomy

Various versions began to appear across Reddit, forecasting the return of the meme.

We’re already a few days into the 2019 and, a few minor ripples aside, Ugandan Knuckles has yet to make the predicted rival, but quite possibly that was never the point. Fans of meme seem more interested in calling attention to themselves and upsetting liberals than in actually reviving the character.

These people claim they are in fact quoting lines from a film and not just using a stereotypical African accent, although many of the things they say are not direct quotes from the movie in question. They also point out that the Ugandan filmmakers behind Who Killed Captain Alex? are big fans of the meme and have retweeted versions of it. Although the fact that a small budget studio are fans of free publicly is more likely evidence of the power of capitalism than of meme not being racist.

All this can be very confusing to the uninitiated. A video game character, created in the ’90s, was parodied for approximately one second on YouTube, turned into a meme that got merged with a bit of dialogue from a low-budget film from Uganda, and is now being called out as promoting racial stereotypes.

Good thing the holidays are over, because even the bravest amongst us would have a hard time explaining this one to our grandfathers over dinner.