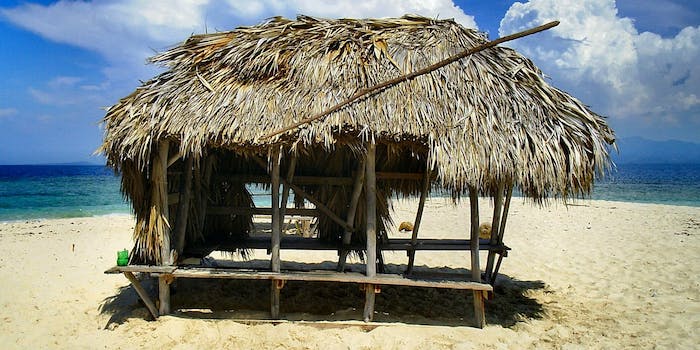 Wouldn't Vines be more appropriate for a desert island?

If you’re stranded on a desert island with a rapidly dying cell phone, probably the last thing you’re going to worry about is sending a tweet. Obviously, with gorgeous views like that, it’s better to go with Instagram.

Still, Twitter wanted to know what you would tweet if you decided to use your final 5% on its platform.

You’re stranded on a desert island. Your phone has charge for just one final Tweet. Go!

And boy did people have thoughts.

Some of them chose not to really get into the spirit of things.

“help i’m stranded on a desert island” and tag my location https://t.co/aW0OTBBeVR

Although others had more interesting ways to get rescued.

"Beyoncé is bad and not good." And then I'd turn my location on because that would ensure an entire army of people come find me at which point I can explain the reasoning for my tweet and that actually I think Beyoncé is good then we will do the single ladies dance then go home. https://t.co/a9GiPQ81Vy

Dear @UberEats could you please deliver me a kebab and any chance your driver could drive me home?

Others took the opportunity to get some stuff off their chest.

Nicolas Cage was robbed of another Oscar award when he wasn’t nominated for Best Actor in the movie Face/Off. There are plenty of reasons to show why this one was one of the most impressive acting performances of all-time & I’d like to list why this is the case in a thread (1/94) https://t.co/s0siYFr3lj

I have not seen the entire Lord of the Rings trilogy. Don't @ me. https://t.co/q1GqxeAEWd

"Real Emo" only consists of the dc Emotional Hardcore scene and the late 90's Screamo scene. What is known by "Midwest Emo" is nothing but Alternative Rock with questionable real emo influence. When people try to argue that bands like My Chemical Romance are not real emo, while s https://t.co/zmRxXjzsmF

Tell my wife and kids I love Patrick Mahomes https://t.co/rI2EjRWMVC

Naturally, there was a lot of complaining about Twitter, including a lot of calls to get Nazis off the platform.

Remove the nazis from your platform https://t.co/iPovthp2c4

It's a shame how fast Twitter is banning marginalized people especially women who are targeted by racism on this very platform. https://t.co/gwrGLGHE7f

There were also a lot of people who wanted to spend their last moment online talking about sports.

Don't let my death distract you from the fact the Falcons blew a 25-point lead in the Super Bowl #28to3 https://t.co/uQSw4OapbN

"Aga was 3-0 up in the third set of a Wimbeldon SF, with a player who she is 7-0 against waiting in the final"https://t.co/woShtnKXgf

When you find somebody better than Eli feel free to put them in…… until then, SHUTUP https://t.co/hqnnQjlPnR

The warriors blew a 3-1 lead in the nba finals

And, obviously, there was no way brand Twitter was not going to jump on board.

They may have been on a break, but Ross was definitely in the wrong. #TeamRachel #NeverForget https://t.co/CwBxm4M0zD

*phone dies while we decide who gets the final roast*
😢
Press 'F' to pay respects https://t.co/pj9PgXOchw

A few people chose to look on the bright side.

I smash my phone and yell "Freeeedom!"

"Found a way to escape my student loans, DM me for info"

While other users felt it was best to go out messing with people.

Oh that's easy.. I have left 1 million dollars in a locked safe deposit box and the location of key and address is in th………. pic.twitter.com/RYiPIAWUkv

There was also a fairly large number of people who decided that being stranded on a desert island afforded them the perfect opportunity to be racist, but we’ll spare you those tweets. Besides, a quick look through their feeds revealed that they also had no problem being racist at home with a full battery charge.

We’ll leave you instead with someone who tweeted the meme that will never die. It’s a safe bet that, no matter how long you’re stranded on that island, when you get back, the Distracted Boyfriend will be here waiting for you.