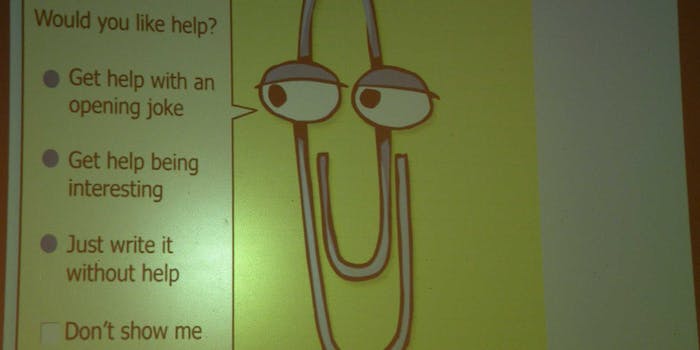 So now, before we go any further, I’ll remind you that Ballmer used to be the CEO of Microsoft. Microsoft is the creator of Microsoft Word. Microsoft Word used to have this tool called Clippy, an animated paperclip that told you how to use the software.

Clippy was obnoxious, and a smartass. Clippy mocked you. No one liked Clippy. Clippy infamy is a product of our residual hate of him.

I think you know where I’m going with this.

When the Internet sees an opportunity, we really just go for it.

according to my sources, ballmer plans to rename them The Clippys.

Steve Ballmer just bought Clippy for $2 bn. MT @WinObs “Now standby for all the LA Clippy jokes. Go ahead Internet – do your thing.”

Introducing Clippy, the new mascot of the LA Clippers pic.twitter.com/L6kzvDOuL8

Anyone else find it ironic that Ballmer is going to buy the Clippers….He must really be attached to clippy.

Steve Balmer buys the Clippers, the new mascot, “Clippy” will jump on the court and say “It looks like you’re trying to shoot a 3-pointer”,,

For some reason, we all decided tonight was the night to really go for it with this Clippy joke… even though this news, joke included, broke earlier.

But wait. This goes way back.

Speaking of teams that would prob be better off under a Chris Hansen/Steve Ballmer ownership…just freaking wow….https://t.co/kemES8ISYj

Maybe Steve Ballmer can somehow trick Donald Sterling into selling the Clippers to him. Then he can move them back to Seattle…

Way to beat a dead horse, everyone. Actually, a 3-year-old dead horse.

Back to the drawing board!

UPDATE:  According to TMZ, Ballmer isn’t buying the Clippers. All above comments about the Clippy joke remain true.

Photo via medigirol/Flickr (CC BY 2.0)