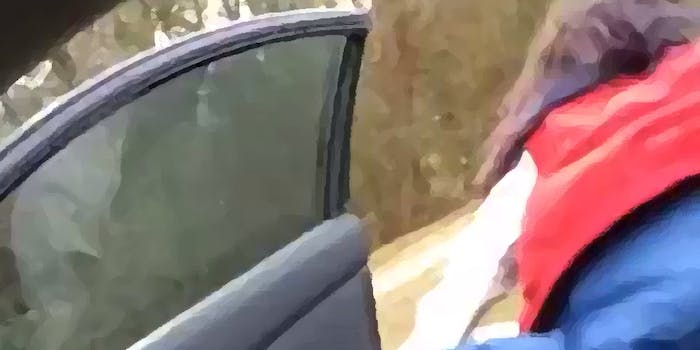 This ended in disaster. But don't worry—she's all right.

Note to anyone trying to twerk out of a moving car with the side door hanging open: Don’t. You will fail.

Case in point: this vine of a young woman doing the Whip Dance to “Lil Bit” by K Camp until she rolls into the street. It’s been played more than 6.3 million times.

“Good thing I caught it on camera,” wrote user Futuremodel_, who hasn’t provided a lot of context for the video.

Most important: Is this girl all right after falling out of the car?

A Media Takeout post titled “Teenage Girl Is RUSHED TO THE HOSPITAL” suggests the dancer suffered a neck and spine injury and is now in a coma. That’s probably a hoax, though: According to Futuremodel_’s vine, her friend is OK. “She’s just a little ashy—that’s it!” she says.

Here’s the YouTube version of the video. You can see what looks like the window going up, potentially causing her to quickly move her hand, lose her balance, and fall out of the car. Fortunately, the vehicle doesn’t look like it’s going too fast.

And on Instagram, you can see a longer cut:

I reached out to the original poster for comment but haven’t heard back. If you know anything about the girl who fell out of a car twerking—could the cause be Jimmy Kimmel, like the great viral twerk fire fail of 2013?—please email cooper at dailydot dot com.

Update Jan. 19, 6pm: @Futuremodel_ clarified to me in a tweet that her friend wasn’t twerking—she was doing the Whip Dance. She also said of her friend, “Yes she’s perfectly fine.”