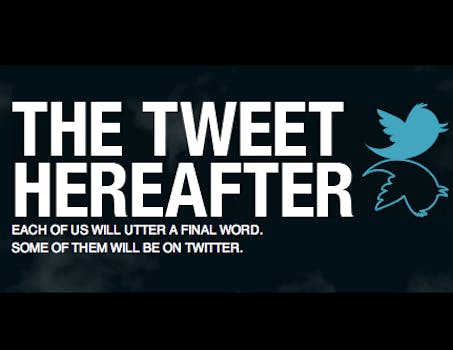 "Do I really want that to be my last tweet?" That's the thought that inspired the creators of a new website.

In a morbid but perhaps inevitable turn, you can now browse the final tweets of the recently deceased. Set up by Michael McWatters and Jamie Forrest, The Tweet Hereafter updates regularly with the most recent posts from notable Twitter users who have just passed away.

The idea came about after the sudden death of conservative commentator Andrew Breitbart, whose final words on the microblogging site were an apology for calling someone a putz during an online argument. Fittingly, Forrest and McWatters’ resulting exchange took place on Twitter as well: 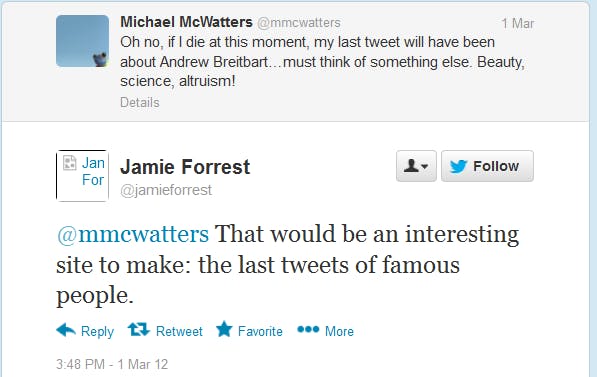 After the final tweet of model Reeva Steenkamp, found dead at the home of her Olympic runner boyfriend Oscar Pistorius, was publicized last week, the idea of online life after death has become a hot topic once again. Is it appropriate to analyse a person’s online presence after they are dead?

Looking at the messages collated on The Tweet Hereafter, it’s difficult not to look for hidden meaning. Hauntingly, the most recent update reads: “Things have been hectic. But I’m still here.” It’s the final message of country singer Mindy McCready, who was found dead in her home yesterday.

For those who are concerned about the state of their Internet legacy after death, there are already several options on offer. DeadSocial sets up tweets and Facebook messages to be released at pre-planned intervals, whereas LivesOn (“When your heart stops beating, you’ll keep tweeting.”) takes a more proactive approach. The LivesOn app, due to launch in March of this year, is designed to maintain a facsimile of the user’s Twitter feed after death. After tracking the user’s syntax and retweeting habits, LivesOn will attempt to recreate the user’s Twitter style, with occasional input from an executor who was nominated by the user when they originally signed up for the service.

Like The Tweet Hereafter, apps such as DeadSocial and LivesOn are bound to be controversial—even if they are used with the express permission of the deceased. But The Tweet Hereafter co-creator Jamie Forrest is philosophical about the situation, writing: “The site is certainly morbid, sometimes interesting, quite often meaningless. But we hope it makes you think a little bit.”