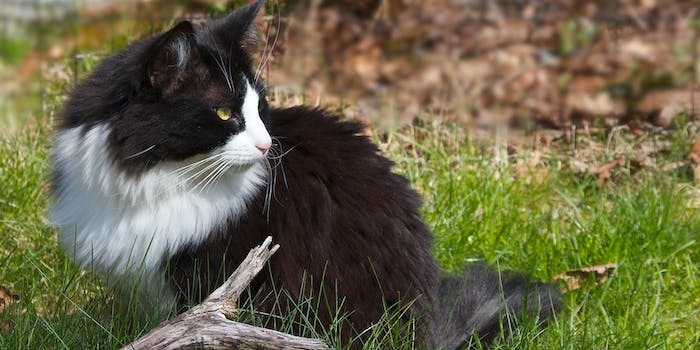 Tuxedo Stanley, a Canadian cat who famously ran for mayor last fall with the support of Anderson Cooper and Ellen DeGeneres, has died from kidney cancer.

The 4-year-old feline captured the world’s attention a year ago after its owner, Dr. Hugh Chisholm, had the cat run for mayor of Halifax Regional Municipality in Nova Scotia, Canada, under the Tuxedo Party. Stanley hoped to raise awareness regarding Halifax’s feral cat problem.

“I mean, we cats are natural born politicians,” Chisholm, a veterinarian, wrote on Stanley’s website, pretending to be the cat. “Look at Hank [the cat] who’s running for the U.S. senate or that old guy Stubbs up in Alaska. He’s been mayor for for 15 years! Personally, I think more cats would get involved in politics if it weren’t for the whole opposable thumb issue. The humans got the better end of that deal.”

Although Stanley’s campaign was ultimately unsuccessful (official ballot laws prevent animals from holding public office), that didn’t stop Cooper and DeGeneres from having some fun.

“We usually don’t take sides politically, but I think we’ll go ahead an make an unofficial endorsement for one candidate for mayor of Halifax. His name is Tuxedo Stan,” Cooper said during a segment called the RidicuList last fall. “I want to go to a Canadian dinner party as soon as possible, just sitting around the table, next thing you know, your cat is running for mayor.”

Following Stanley’s run, the city of Halifax provided $40,000 to the local SPCA in the cats name to “to help establish a low cost spay and neuter clinic,” the National Post reported.

Stanley fell ill in January and was euthanized  while lying on his favourite rainbow rug Sunday.

“He died peacefully,” Chisholm told the Post. “He was sitting in my wife’s lap. She had his favourite mat, a rainbow rug he used to like to lay on by our door, and so he lay on the mat on her lap. … It was extremely hard to say goodbye to Stan. He was a very special cat.”