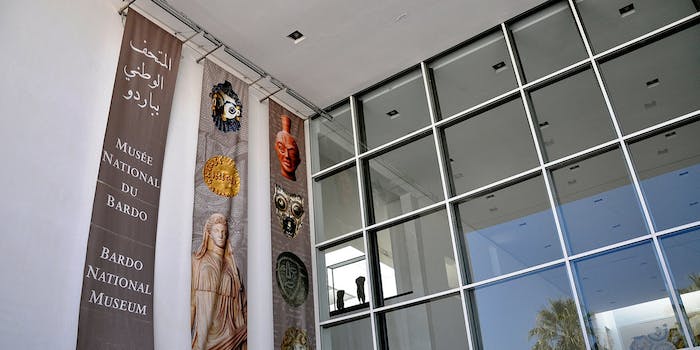 Their motives are currently unclear.

Gunmen reportedly armed with grenades and assault rifles killed 19 people in a Wednesday attack on a museum in Tunisia, holding several hostages and gripping the country’s capital with fear before security forces put an end to their siege.

The victims of the attack at the National Bardo Museum in the capital city of Tunis included 17 foreign tourists and two Tunisians.

Initial reports claimed that there were two or three armed attackers. A Tunisian told CNN that government security forces had killed two gunmen.

It is currently unclear why the gunmen carried out the attack or whether they are affiliated with any terrorist groups.

Tunis-based journalist Naveena Katoor reported early in the standoff that the attackers were holding hostages, and that the Tunisian parliament—located within walking distance of the museum—was evacuated in response to the attack.

Reports that 8 people – 7 foreigners, 1 Tunisian have been killed in terrorist attack at Bardo museum in Tunis. More hostages reported

Reuters reported that the police operation ended around 10:30am EDT, after security forces freed all of the hostages in the museum.

Condolences have already begun pouring in from world leaders.

Attack in Tunisia is appalling & condemnable. We stand firmly with the people of Tunisia in this hour of grief & pray normalcy returns soon.

The December 2010 anti-government uprisings in Tunisia launched the Arab Spring revolutions that rocked the Middle East for roughly four years. Unrest in the region eventually spread to more than a dozen countries and deposed leaders in six nations, including Egypt and Yemen.

The Arab Spring, which was partly fueled by social media activism and organizing, resulted in the first democratic elections in Tunisia in its recent history. While the country is generally seen as one of the more successful examples of post-Arab Spring reform, it has recently begun dealing with attacks and infiltration by the Islamic State (ISIS). Recent studies have found that at least 3,000 Tunisians have traveled to Iraq and Syria to receive training from ISIS.

It is currently unclear whether the gunmen in Wednesday’s attack are affiliated with the Islamic State.

Update 10:32am CT, March 19: The Islamic State on Thursday claimed responsibility for the attack, which killed a total of 23 people. A U.S.-based terrorism watchdog group also said that it believed IS to be responsible.