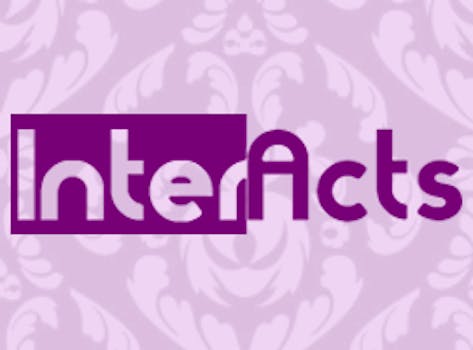 How to tune in to InterActs

"Interacting with Transmedia" brings together leading figures in a variety of disciplines to assess how different disciplines are engaging audiences and expanding stories across a variety of platforms.

Today the Daily Dot is pleased to present the first InterActs round table. A partnership with the National Alliance for Media Arts and Culture (NAMAC), InterActs is a series of conversations with various members of the world of online media creation.

Through this series of hosted, live-streamed discussions, we hope to explore a number of topics and questions related to online creation: the way the Internet is shaping how we create, what we create, and who gets to create; how online creative communities are forming and evolving; and the many practical, sociocultural, and legal challenges of creating within a boundless and ever-changing Internet.

Today, InterActs kicks off with a look at transmedia—the art of storytelling across multiple platforms and formats via the Internet, film, literature, and beyond. The discussion, moderated by Professor Henry Jenkins, starts at 3pm EST. Tune in right here!

You can participate in the conversation by commenting here, on YouTube, at the NAMAC.org mirror, or by tweeting during the broadcast with the hashtag #InterActs.

Check out our discussion resources and panelist bios below.

Moderator:
Henry Jenkins is Provost’s Professor of Communication, Journalism, Cinematic Arts, and Education at the University of Southern California. He is coauthor, with Sam Ford and Joshua Green, of the 2013 book Spreadable Media: Creating Value and Meaning in a Networked Culture. He is also author of Convergence Culture (2006), Fans, Bloggers, and Gamers (2006), The Wow Climax (2006), Textual Poachers (1992), and What Made Pistachio Nuts? (1992); coauthor of Confronting the Challenges of Participatory Culture (2009); editor of The Children’s Culture Reader (1998); and coeditor of Rethinking Media Change (2004), Democracy and New Media (2003), Hop on Pop (2003), From Barbie to Mortal Kombat (2000), and Classical Hollywood Comedy (1994). From 1993-2009, he was the MIT Peter de Florez Professor of Humanities and codirected MIT’s Comparative Media Studies graduate degree program. Since coming to USC, Jenkins has formed the Participatory Culture and Learning Lab, which includes Project New Media Literacies and Media Activism and Participatory Politics. He holds a Ph.D. in communication arts from the University of Wisconsin, Madison, and a Master’s degree in communication studies from the University of Iowa.

Panelists:
Nuno Bernardo is the CEO and Founder of beActive, an award-winning Film, TV, and Transmedia production company. Bernardo is the creator of popular Wattpad phenomenon Aisling’s Diary and most of beActive’s transmedia projects, including: Collider World, a sci-fi project with a full cross-platform approach including comic books (now on the top 5 paid apps on Comics Plus), webisodes, motion comics, games for mobile platforms & Web and online presence, and a movie which is now in post-production; Beat Girl, the first scripted series on Pinterest, featuring a young girl’s musical self-discovery in the exciting world of DJing. The story is being told on several platforms, including a Web and TV series, a book, DJ interviews, a DJ set, book prequels on writing and reading social networks Wattpad and Movellas, a film and a mobile game; and Road to Revolution, a documentary film, TV series and Web series, with an interactive app on the way, about three journalists who traveled 15,000 kilometres across 10 countries in the Maghreb and Middle Eastern regions, following the path of the Arab Spring.

Jo Ellen Green Kaiser is the executive director of The Media Consortium, a national network of 65 independent cross-platform outlets committed to engaged, high-impact journalism. Under Jo Ellen’s tenure, the Consortium has experimented with a number of innovative collaborations, including the social-media based Occupy May Day, the cross-platform Natural Gas Reporting Project, and a local-national Reproductive Justice Reporting Project.

Passionate about mission-driven independent media, Jo Ellen has worked for a succession of independent magazines, including stints as managing editor and associate publisher of Tikkun, Publisher of LiP: Informed Revolt, and executive director and editor-in-chief of Zeek. She is driven by a belief that democratic societies thrive only when their members have access to accurate information and informed opinion. Before coming to the Consortium in 2011, Jo Ellen was a leading figure in Jewish media and remains an expert on the Jewish social justice movement. She is the coeditor of Righteous Indignation: A Jewish Response to Justice (Jewish Lights) and co-led the Righteous Indignation Project. She has written about Jewish social justice for a number of publications, including The Jewish Daily Forward, Sojourners, Tikkun and Interfaithfamily.com

Jo Ellen can be found daily on twitter at @jgksf.

Luisa Dantas is a Brazilian-American filmmaker who has worked on a wide array of documentary and narrative projects in the U.S. and Brazil. Her most recent project, Land of Opportunity, chronicles the reconstruction of New Orleans through the eyes of those on the frontlines and asks the question: what kinds of cities do we want to (re)build in the 21st century?  The transmedia project includes an award-winning feature film and upcoming interactive storytelling site focusing on urban equity produced in conjunction with a spectrum of  national and local partners. Luisa also coproduced the acclaimed documentary, Wal-Mart: The High Cost of Low Price, and directed and produced the Web series Voices From the Gulf for ColorofChange.

Luisa’s first fiction film, Bolo, was produced in Brazil and screened in several international festivals. She received a grant from the National Hispanic Foundation for the Arts and Disney/ABC to develop the screenplay Summertime. She has also written for the animated series Go, Diego, Go! for Nickelodeon Television. Luisa is currently adapting the acclaimed non-fiction book Desire Street, by Pulitzer-prize winning author Jed Horne, into a screenplay. She teaches screenwriting and documentary filmmaking at Tulane University and received an M.F.A in Film from Columbia University.

Ingrid Kopp is director of digital initiatives at the Tribeca Film Institute where she oversees the TFI New Media Fund and leads the Institute¹s digital and interactive programs including TFI Interactive and Tribeca Hacks. She is also programming the inaugural Tribeca Storyscapes program for interactive, transmedia work at the Tribeca Film Festival in 2013.

Before that she was editor-in-chief of Shooting People in the U.S.­, an international networking organization for independent filmmakers with over 38,000 members. She began her career in the Documentaries department at Channel 4 Television in the U.K. before moving to New York in 2004 to work as a producer for a number of independent production companies. She writes about film, social media and technology for various publications and is a frequent speaker on interactive storytelling and maker culture.
You can always find her on Twitter at @fromthehip.

Danielle Riendeau is a writer and media artist with a penchant for holding several jobs at once (simply because the world of multimedia is too interesting to do any one thing!). She currently lectures in the graduate department of Digital Media at Northeastern University, teaching courses on interactive storytelling, game design and game development; writes for Kill Scree  magazine on gaming, technology and culture; and serves as the Communications Coordinator at the ACLU of Northern California. She is trained as a multimedia artist and digital filmmaker, with an emphasis on interactive narrative.

Marc Smolowitz is an Academy Award-nominated film, television & digital media producer (The Weather Underground 2003, Trembling Before G-d 2001), director (The Power of Two 2011) and executive producer (Still Around 2011 and The HIV Story Project) with 200-plus years of experience across all aspects of the entertainment and media business. His focus is social issue filmmaking, and his current documentary projects include: “Keep The Promise” (Director/Producer – Completed), “The Campaign” (Producer, funded by ITVS, in post), “Lone Soldiers” (Producer, in post), “The Beachhead (Director/Producer, in production).

Most recently, he was the in-house producer at TellyTopia, a Silicon Valley start up specializing in interactive television, IP-TV and VOD products for cable & satellite companies. In 2013, he works fulltime as an independent filmmaker, while maintaining a thriving consulting practice that guides other documentary producers through key stages of development, production, post, completion, and distribution. As a freelancer, he regularly works on special projects with a diverse slate of SF Bay Area-based media and technology companies, nonprofits, and philanthropies. Finally, he is a Lecturer in the Film & Digital Media Department at the University of California, Santa Cruz. Since 2007, Smolowitz has served as Chair of the founding board of directors of the San Francisco Public Press – a nonprofit news startup committed to local, investigative print and online journalism that serves the public interest needs of underserved communities in San Francisco. He has been an active member of Full Circle Fund in San Francisco since 2006, an engaged philanthropy organization where he served as the technology circle’s funding chair from 2008-2010. For more info, see IMDB, LinkedIn, and Twitter: @marcsmolowitz.