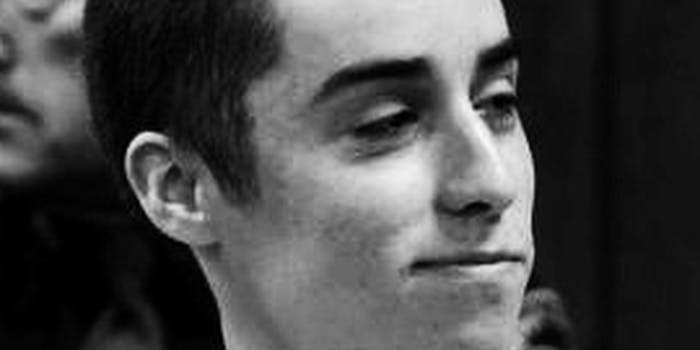 Dylan Klebold and Eric Harris. James Holmes. T.J. Lane. These killers may be infamous for their crimes, but to a large subset of the Internet, they're heroes.

And increasingly, it appears, that group includes teenage fans.

“T.J., why so sassy,” was the only comment one fan had to say in response to yesterday’s courtroom speech wherein Lane, wearing a t-shirt that read ‘KILLER,’ mocked the families of the 3 students he killed in a Cleveland high school cafeteria last year.

“TJ LANE THOUGH,” said another, using Tumblr shorthand for a public figure they find incredibly hot, adorable, or impressive.

“Regardless of what he’s done, he’s really attractive..lol,” echoed a third..

Glorifying the anti-hero is nothing new to our culture; Heathers, Natural Born Killers, Fight Club, Silence of the Lambs, and Death Note are all examples of successful stories with large fanbases that glorify fictional mass murderers or serial killers. The new television show Cult is currently exploring fictional serial killer fans, as it explores a fictional cult TV show and the fictional cult killings it inspires. In Cult, some fans take their hero-worship of the show’s fictional killer too far, while other fans step in to help solve the murders.

But how far is too far when fans are only expressing themselves on Tumblr and Facebook?

An 18-year-old fangirl calling herself “Elysse Klebold” after Columbine shooter Dylan Klebold has a Tumblr devoted to the Columbine shooters, Charles Manson, Aileen Wuornos, and other serial killers and mass murderers. In some ways, it’s a typical Tumblr full of teen angst, GIFs, and iconoclasm. And it’s just the tip of the iceberg when it comes to fangirls of killers on Tumblr.

“I wish I could swap places with him,” reads one anonymous confession at Holmes Confessions. “I’m a good person, but he was better and I can admit that.”  Holmes Confessions is not, as you might think, a Sherlock Holmes fandom blog, but rather a James Holmes fandom blog. The blog started on March 13—the same day Holmes pled not guilty in the shooting deaths of 12 people in an Aurora, Colorado movie theater last year.

“James isn’t a monster,” reads the blog’s first confession. “He’s a man who needs our help.”

On DeviantArt, it’s easy to locate the serial killer fandom. Searching for famous killers like Bundy, Dahmer, or Gacey will bring up a dizzying number of comics and works of fanart devoted to the killers, sometimes imagining them interacting with each other. One artist imagines Bundy and Dahmer as cute “chibi-fied” characters in a wacky romance, with herself as the starstruck fangirl. Others just draw them murdering people. (And eating them, in Dahmer’s case.)

The Facebook page “James Holmes for Life” has over 3,000 subscribers, though pictures of actual killers are rare, sandwiched in-between racist memes and image macros. Still, the occasional ode to Holmes does pop up. “if anyone gets pissed that I upload any of these,” states the site’s admin, “it’s meant to offend, it’s trolling, james holmes style.”

So are all the fans who make GIFs, create fanart, and praise the hotness of real-life killers all just trolling the rest of us?  If they’re doing it for attention, they’ve certainly got plenty of it. Digg’s Veronica De Souza was horrified when she stumbled across the love on Tumblr.  “There are actual TJ Lane FANGIRLS on Tumblr,” she tweeted.  Other Twitter and Tumblr users began browsing Tumblr’s “TJ Lane” tag, pronouncing the results “repulsive.”

On her NSFW Tumblr, user nekomeowmeowmeow‘s praise for Lane (“hes cool as fuck”) is getting her plenty of attention, and she seems to be lapping it up. ” i actually want to die being murdered,” she tells one horrified commenter. Could she be an actual psychopath? another politely inquires. “there’s always that possibility,” she answers tactfully. 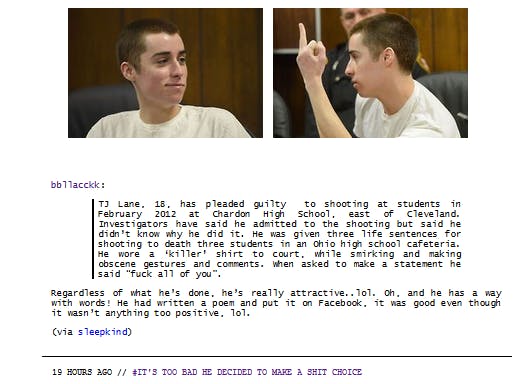 Of the many, many, many Tumblr accounts devoted to crime and criminals, ki11ers and ramirezbundydahmer are among the few who avoid pairing their posts about criminals with praise for the killers, sexual fantasies, or glorified fictional crime scenarios. They are also among the few criminal blogs unimpressed by Lane’s speech. “This is what he wanted,” ki11ers said.

[H]e wanted all of you people to be very angry about his actions and type furiously online about how disrespectful he was, haha. He got what he wanted. You gave him what he wanted. I’m sure he’s pleased right now.

“[H]e probably received letters from teenage girls claiming to love him because of what he did,” ramirezbundydahmer echoed. Speaking to an anonymous commenter who asked, “Is it wrong to have sympathy for killers/sexual offenders?” she answered:

I think it’s alright to sympathize with certain aspects of their life, their childhood and environment, for example, but I feel as though in some cases people can be manipulated to feel sympathy towards certain people, particularly criminals…

“I think it must trigger some sort of savior complex,” wrote special-snowflake-hall-of-fame, “where they fantasize that they were able to save him with their love, friendship, and make him see the light.” They were one of many who took to the “TJ Lane” tag to comment on the fan activity they saw—and fuel the flames of debate about where to draw the line between “reacting” and “fangirling.”

Perhaps, ultimately, it’s as simple as keeping it to yourself. “Go ahead and write your TJ Lane fanfics but don’t publish them,” Tumblr user chadwagon advised the Lane fans.

And if the fans don’t appear to be listening, then it seems the outrage from the rest of Tumblr will likely drown out their support of Lane.

At least until the next killer comes along.