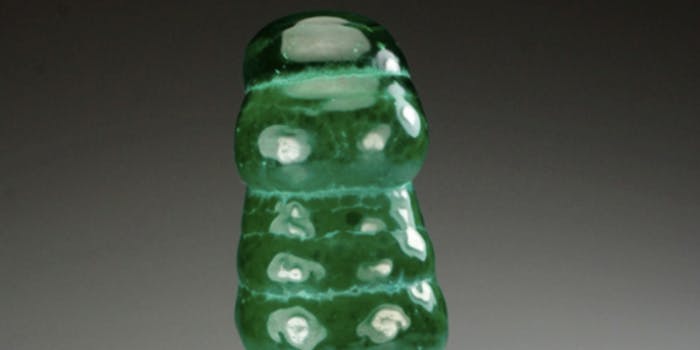 But as soon as Tumblr noted the stalactite’s possible utility as a sex toy, other users were quick to point out that malachite is a poisonous, water-soluble mineral. This was fact-checked by one of BuzzFeed’s science reporters, Dan Vergano. In his opinion, the stalactite would be safe to use after a wash to remove any malachite particles or dust.

User badscienceshenanigans taught Tumblr an important lesson in interdisciplinary sciences. It’s not enough to simply consider the toxicology of the mineral itself. You also have to think about how the mineral will interact with the biological, erm, substrate. In other words: is your vag goo going to dissolve the malachite faster? And, if so, will it hurt you?

The Daily Dot reached out to badscienceshenanigans, who is a food science expert with a degree in agricultural sciences. To protect her Tumblr activities from leaking into her professional life, she asked we refer to her only by her first name, Sarah.

“We do a lot of work with how biology and materials and fluids all get together,” she said in a phone interview. “Stuff going through pipes is a big part of my job.”

She said she first saw the stalactite post several weeks ago and couldn’t get it out of her mind. Unsatisfied by the initial conclusion that the malachite would be harmless, she decided to dig a little deeper.

“Systems can be complex. Just because you ask one expert doesn’t mean you’ve covered all your bases,” Sarah said.

Malachite contains a lot of copper, which Sarah said is a component of pesticides: “We use copper to kill stuff a lot.”

So, in her conclusion, malachite may not poison you per se, but that doesn’t mean you want to put it in your vagina. Here’s her logic:

Vaginal lubrication is mostly water. Malachite dissolves in water. Additionally, the vagina is very acidic and full of salts—things that will speed up malachite’s dissolution. And in one indulgent session with a boutique sex toy befitting Gwyneth Paltrow’s list, natural vaginal secretions may release enough copper from the malachite to kill off all the bacteria and fungi that make their home in your vagina.

As anyone who’s suffered a yeast infection after taking antibiotics can tell you, the balance of this microbial ecosystem in the vagina is important to overall vaginal health. Kill off the microbes, and you open the door for the overgrowth of undesirable critters like yeast or E. coli. At best, you’re looking at a raging yeast infection. At worst, you might seriously alter the ecosystem of the vagina, leading to unknown consequences.

Sarah said that from a scientific standpoint, there’s no harm in putting malachite up your bum. But she noted that the lack of a flared base means you’re running the risk of losing the stalactite up there—something that actually happens pretty regularly when people play with toys not specifically designed to enter the anus.

She added that considering all systems is a hugely important part of a lot of public health and safety practices. Such oversights can lead to unfortunate consequences from using improper materials for sex toys or, more importantly, the Flint water crisis. The problem there, Sarah wrote on Tumblr, is that officials did not consider how the chemical makeup of the water would interact with the pipes—they only considered the potability of the water before it went through the pipes.

“Similarly, in concluding that the stalactite is fuckable, the internet only considered the stalactite itself,” Sarah wrote on Tumblr. “Not the biochemical processes that would happen to it as it, welp, went through the pipes.

Read her full post in all its glory below.

And yeah, be careful what you stick inside you.