Rumors of this giant panda’s death are greatly exaggerated

The Taipei Zoo is making efforts to assure animal lovers from near and far that a beloved panda is alive and well.

The 11-year-old Tuan Tuan, pictured here it what could easily be mistaken for a ransom photo, was recently rumored to have died. 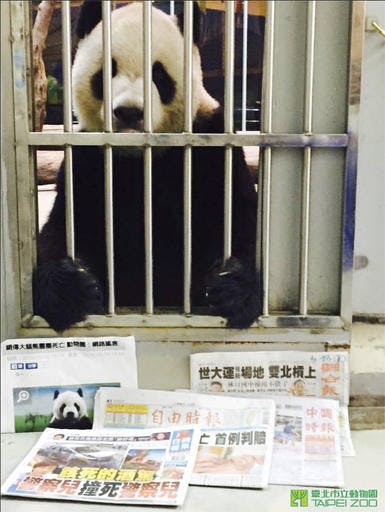 Tuan Tuan, who was photographed with newspapers as evidence of the date, was reported dead by China’s official Communist Party newspaper, the Global Times. The story swiftly made the rounds on the Chinese-language Internet. The Times later retracted the story and apologized for not checking their facts.

Rumors of Tuan Tuan’s death came on the heels of the inauguration of Taiwan’s new president, Tsai Ing-wen, who favors Taiwan’s independence from China. Since giant pandas come from China, Beijing has often used the animals to make political statements. Taiwan is a self-governing island, but Beijing claims Taiwan as a territory which can be controlled by force if necessary.

Tuan Tuan and mate Yuan Yuan’s names translate as “Reunion” when combined. They were sent by Beijing to Taiwan in December 2008 as gift following the election of former President Ma Ying-jeou, known for his China-friendly policies.

Whatever the reason for these shady reports, we are very relieved to know that our fluffy friend Tuan Tuan lives! Tuan Tuan celebrated his 11th birthday earlier this year with an adorable specialty cake.