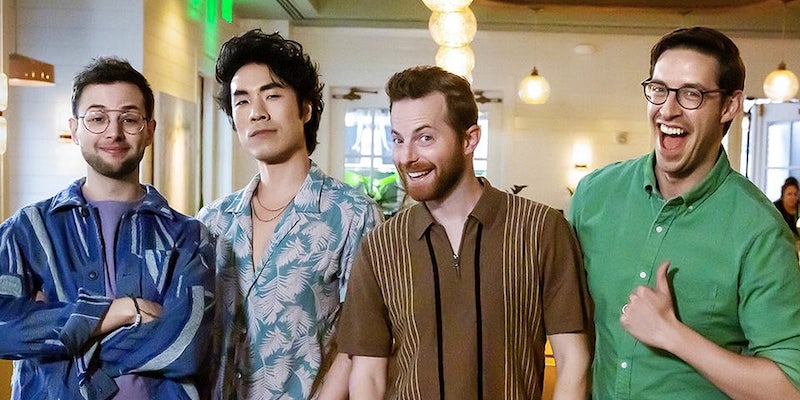 The allegations first appeared on a now-deleted Reddit thread.

The Try Guys is a group composed of four guys (Ned Fulmer, Keith Habersberger, Zach Kornfeld, and Eugene Lee Yang) who, as you might expect, try things and film them for their very successful YouTube channel. While they got their start on BuzzFeed, they’ve since formed their own channel to the tune of more than 7.83 million subscribers, started a podcast, and got a TV show on the Food Network. And many of their fans and viewers are completely transfixed by an explosion of infidelity rumors involving one of the Try Guys that’s already getting comparisons to John Mulaney.

On Monday night, a now-deleted post on the Try Guys subreddit (but was repurposed in a Twitter thread by the account @nedfulmerexpose) alleged that Fulmer cheated on his wife Ariel (who’s appeared in several videos over the years and is well-known to viewers) with a Try Guys associate producer. The evidence shared on Reddit included a blurry video of someone purported to be Fulmer making out with the associate producer, DMs reportedly from the producer’s fiancé, and Fulmer’s lack of appearances in recent Try Guys videos—including the introduction to Try Guys episodes—as well as their podcast, The TryPod. The amount of circumstantial evidence also involves analyzing which parties have unfollowed which parties, as well as Ariel Fulmer’s removal of the phrase “Ned’s wife” from her Instagram profile.

On Tuesday afternoon, the Try Guys announced on social media that Ned Fulmer is “no longer working with the Try Guys” after conducting an “internal review.”

“We thank you for your support as we navigate this change,” the post concluded.

Update Sept, 27, 2:25pm CT: In a social media post, Ned Fulmer wrote that “Family should have been my priority, but I lost focus and had a consensual workplace relationship. I’m sorry for any pain my actions may have caused to the guys and the fans but most of all Ariel. The only thing that matters right now is my marriage and my children, and that’s where I’m going to focus my attention.”

Ariel made her own post on Instagram: “Nothing is more important to me than Ned and our family, and all we request right now is that you respect our privacy for the sake of our kids.”

The news has taken Try Guys fans by storm.

Part of Fulmer’s public persona on the Try Guys is that he’s a total wife guy, someone who’s known for praising Ariel Fulmer or mentioning her in his videos. For the people who’ve been watching Fulmer for close to a decade and forming a parasocial relationship with him, even the rumors of his infidelity feel like a betrayal.

As far as famous men whose infidelity, it’s a situation much closer to John Mulaney—who made his ex-wife a big part of his standup routine—than Adam Levine. Which is a comparison that many also made.

And, naturally, people made memes with some going for the low-hanging fruit joke.

But the other aspect of the infidelity rumors gripped people just as much. Some fans tried imagining how the other Try Guys have reacted to it while others are just as enraptured with the conspiracy that Fulmer has been excluded or even edited out of recent videos.