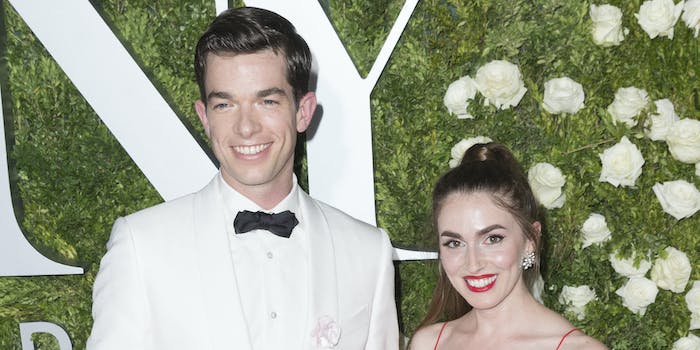 How did John Mulaney become a gossip item?

Unconfirmed reports on Deuxmoi about Mulaney's personal life took on a life of their own.

In the last week, John Mulaney and wife Anna Marie Tendler’s divorce was confirmed, he allegedly started dating actress Olivia Munn, and he did his first standup show since leaving rehab for cocaine and alcohol addiction.

It was a lot to process: Addiction certainly blurs the line between personal and public, and the situation was made even sadder by a murkily sourced claim that Tendler, his wife of six years, also went to rehab around the same time.

Mulaney isn’t a celebrity who’s historically been featured in tabloids or chased down by TMZ. But last week, all hell broke loose over on anonymous gossip account Deuxmoi, which frequently posted about Mulaney over the last year.

In a thread on the Deuxmoi subreddit, user meetmeforkisses posted about meeting Mulaney in 2019, when she was a dancer at a “high-end club” in Manhattan. She said he was respectful but was “definitely drinking and definitely never mentioned a wife.” She claims she “met and hooked up with Mulaney on more than one occasion” but “felt so awful once I found out he was married.” (We reached out for comment.)

That appeared to line up with a blind item from last summer about a comedian and “director of a movie I keep seeing commercials for,” according to text added to the item by Deuxmoi’s anonymous creator. The item claimed this person frequented strip clubs and allegedly solicited prostitutes.

Even though Mulaney is not a film director—Jon Stewart and Judd Apatow were also mentioned—his name became associated with the item, and a post on a Facebook gossip forum alleged to have the uncensored version, which included Mulaney’s name. Around the time he entered rehab in December, fans were close-reading Tendler’s Instagram and predicting divorce.

While last week’s news offered some empty validation, the divorce/Olivia Munn news drew out reactions that were oddly personal. One tweet mocked the blind “trust” people projected on him.

Deuxmoi has previously been criticized for lack of quality control regarding fake submissions, and was formally called out this week by gossip site Oh No They Didn’t, which held up the submission alleging a director was paying for prostitutes as proof of how quickly misinfo can spread. Like, to ONTD: “People kept attributing it to John Mulaney, so much so that people in the comment sections here were saying that ‘he had a reputation for hiring sex workers’”. ONTD also claims that Henry Cavill‘s recent Instagram post regarding “speculation” about his relationship was in response to a Deuxmoi post.

Why this intense focus on Mulaney, a celebrity in his late thirties who’s known for a certain clean-cut look and act, who’s never been involved in any scandals, who lovingly referenced his wife in his specials? Well, that persona might be the exact reason people felt so shocked and betrayed.

Mulaney seems to have picked up a Gen Z audience around the release of 2018 special Kid Gorgeous, which became a source of reaction memes and Tumblr posts. On TikTok, Mulaney-related trends, theories, and impressions have flourished. Being embraced by a younger “stan” generation might have made fans feel more familiar with his private life, like they know him. But haven’t the last few years proven that we should absolutely not invest all of our energy in turning comedians into idols?

The term “parasocial” was mentioned quite a bit in regards to the Mulaney fandom, and typically applies to a one-sided relationship with a celeb. In a piece for Pajiba, Kayleigh Donaldson suggests the news hit a little harder because “a lot of us were eager for a taste of the ‘unproblematic'”:

“We’re too familiar with the cycle of investment and backlash. How could we not be when it’s one of capitalism’s greatest tools? You’re encouraged to latch onto a person or property, show your devotion through commodification, then we rush away when things fall apart.”

But fans haven’t rushed away: The website for City Winery apparently crashed yesterday, as people tried to snatch up tickets for Mulaney’s upcoming shows. Jesse David Fox’s Vulture review of his previous show pointed out the “tension” between this new John Mulaney and an audience perhaps still holding on to their image of him. Isn’t that more exciting than someone just playing the hits?