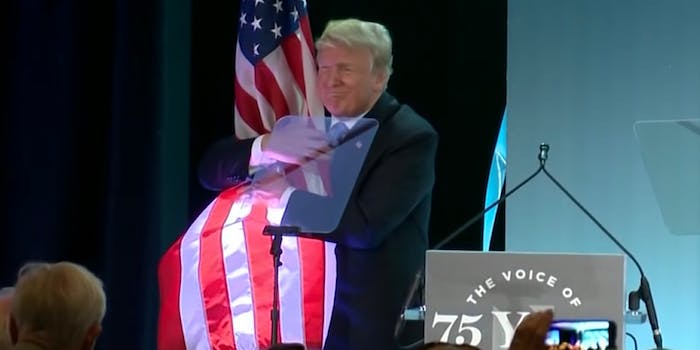 The irony is exhausting.

President Donald Trump on Tuesday hugged the American flag after a speech bashing illegal immigration, and the irony of the gesture is entirely exhausting.

Today, Trump has said illegal immigrants 'infest our country'. He tries to justify ripping children from their families & throwing them in cages. Then he hugs an American flag while walking off stage at an event. I can't think of a more unAmerican asshole ever.

Trump hugging the flag doesn’t mean he loves America. It shows he has no boundaries nor any respect for the office he holds.

This wasn’t the first—and unfortunately, likely isn’t the last—time the president has physically embraced the country’s most sacred symbol.

He also hugged flags on the campaign trail in 2016. At a rally in Florida, the flag-hugging came after supports began to chant “build the wall.”

Trump had a rally in Tampa and he gave the flag a big old hug https://t.co/XJvcx8Ssxh pic.twitter.com/beTBfSHsoP

In his speech to the National Federation of Independent Business on Tuesday, Trump referenced the thousands of immigrant children who have been separated from their parents at the U.S.-Mexico border due to his administration’s “zero tolerance” policy.

“We’re doing well as a country,” he concluded before ambushing the flag.