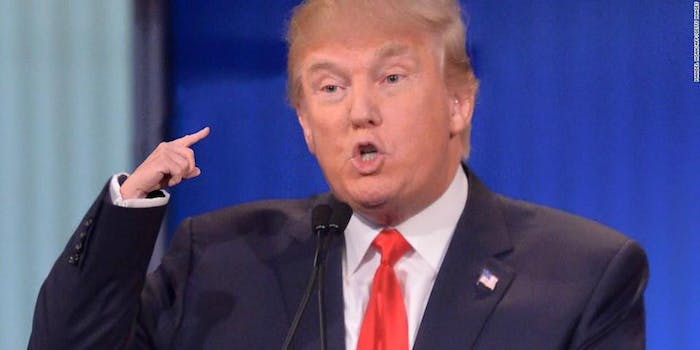 With Donald Trump leading in the Republican presidential race and becoming an inescapable media presence, people are taking extreme measures to make their Trump-dominated days a little more bearable. One of them is a Chrome extension that changes “Donald Trump” to “someone with tiny hands.” And even journalists—maybe especially journalists—are using it. Can you blame them?

For those who didn’t live through the early ’90s—or Marco Rubio‘s campaign events earlier this month—the joke about Trump’s stubby digits originated with sharp, snarky Spy magazine, whose editors regularly called Trump “the short-fingered vulgarian,” which really got under his skin. Who knew it would eventually lead to the presidential candidate discussing his penis size during a televised national debate?

So, yes, there’s a “tiny hands” Chrome extension, which is funny (even though replacing “Donald Trump” with “short-fingered vulgarian” would have been funnier). And it appears someone at Wired had installed that extension to curtail the Trump saturation all journalists must contend with to stay employed in 2016.

Although it’s essential for surviving a workday, the nifty tool is not quite as useful for editing articles for the Web. Now an interesting Wired piece about the Internet’s tendency to focus on the people behind Trump at events bears an even more interesting correction:

And that’s not even the first time it’s happened. Gizmodo points out that other Wired stories calling Trump “someone with tiny hands” still hadn’t been corrected as of Wednesday morning. The Chrome extension has inadvertently become a house style.

It’s a good glitch. A yuge glitch. A very nice glitch that’s had a lot of success. A glitch that wins so much that it’s going to get sick of winning.