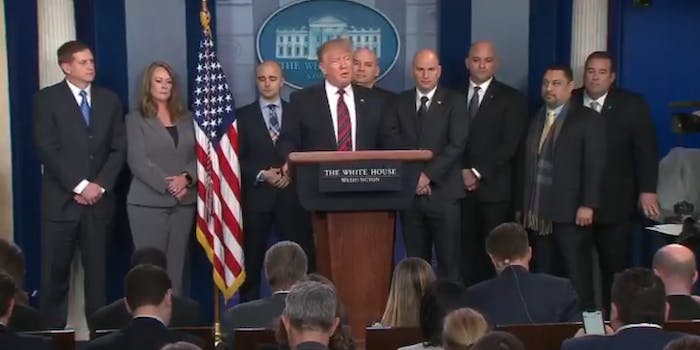 Trump congratulated Rep. Nancy Pelosi on her election as next House speaker and reiterated his demand for a southern border wall, flanked by several bald border patrol officers.

President Donald Trump being flanked by several bald Border Patrol officers at a White House press conference became the butt of jokes Thursday, despite his serious attempt to blame Democrats for the stand-off over border wall funding and subsequent government shutdown.

Trump appeared at the hastily organized briefing to congratulate Democratic Rep. Nancy Pelosi on her election as the next House speaker and to reiterate his demand for a southern border wall.

“I just want to start off by congratulating Nancy Pelosi on being elected Speaker of the House,” he said. “It’s a very, very great achievement, and hopefully we’re going to work together and we’re going to get lots of things done, like infrastructure and so much more.”

Online, at least, that message was completely lost with Twitter users preoccupied by the odd stage presence.

Trump keeps pickin' guys with no hair to challenge his hay stack. Today's press briefin' looked like a feather duster and a carton of eggs. pic.twitter.com/5fx7YTlI3V

Trump, and his gang of Lex Luthors, stressed that Superman is actually the one who is evil. pic.twitter.com/Jn0BMOML1v

What's with the Russian Mob Body guards behind him tho #BreakingNews #trump #mob pic.twitter.com/v0Pwk0Y9Ux

As the government shutdown enters its 13th day and pressure mounts on Trump to compromise somehow, one has to wonder whether his flattery of Rep. Pelosi or his case could be heard at all over the roar of laughter.