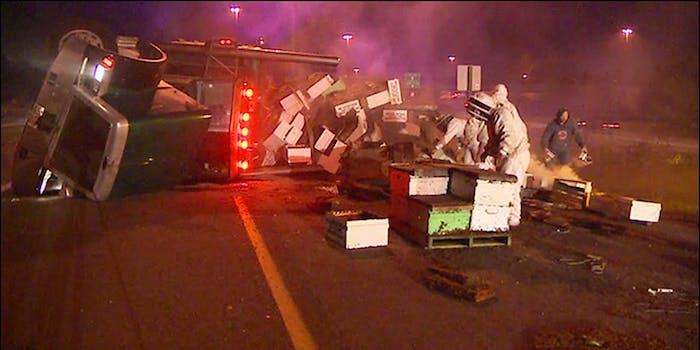 A truck carrying millions of bees overturned on a highway in Lynwood, Wash., early Friday morning. The accident raises a number of questions, but mainly, why was there a truck full of bees?

According to KOMO and the Associated Press, “The truck had just merged onto Interstate 5 around 3:30 a.m. Friday when it tipped on its side, dumping its load of 448 hives, Washington State Patrol Trooper Travis Shearer said. About 13.7 million bees were unleashed in the crash.”

Shearer tweeted from Washington State Trooper Mark Francis’ account as the whole situation was unfolding. He used the hashtag #beesafe because even state troopers like a good pun.

NB I-5 MP182 a semi carrying a load of honey bees has tipped over. HOV Ln blocked. WSP on scene. More updates as I get them. TS

Driver of the semi is not injured. This will be somewhat of a lengthy scene. Bees have to be cleaned up before the semi can be towed. TS

The buzz is its going to be 3hrs till the tipped over semi/bee coll is all cleared up. #beesafe when traveling through that area. TS

The bees were owned by Belleville Honey and Beekeeping Supply of Burlington, which sent beekeepers to try and rescue as many bees as possible before the sun came up.

BREAKING: Fire Dept. WILL put foam on millions of bees along I-5. Will kill the bees. They get more agitated as sun comes up.

It appears the situation is under control, but the cleanup is still in progress.

Still have 2 left lanes blocked NB I-5 @ 405 for semi and bee cleanup. About a 20 min delay Seattle to Everett. pic.twitter.com/9fBLCQSPWH

Needless to say, the area will be buzzing about this for a long time.