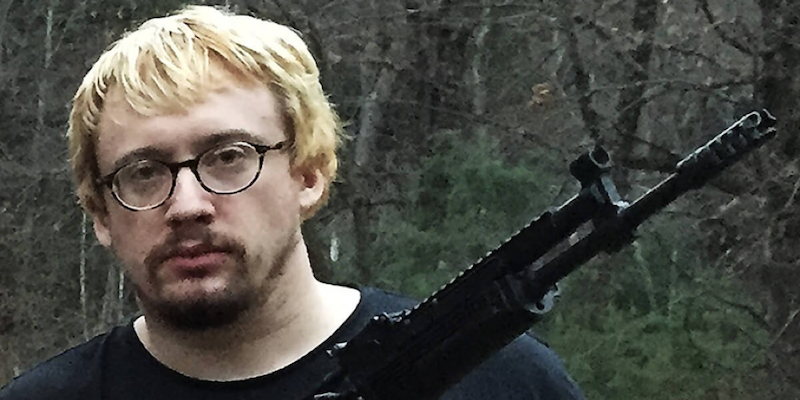 Sam Hyde is not the real shooter—but trolls don't care.

Sam Hyde is not the perpetrator of a mass shooting. But whenever a shooter strikes and the news reports casualties, trolls race to name Hyde as the culprit. In the worst cases, authorities have been tricked into giving Hyde’s name to the press.

In actuality, Hyde is a YouTube comedian most famous for starring in Million Dollar Extreme: World Peace, a show canceled by Adult Swim after six episodes due to its alt-right viewpoint.

The “prank” of naming Hyde goes back to at least 2015, when Twitter users falsely accused him of the shooting at Oregon’s Umpqua Community College. A fake Vice News screenshot naming Hyde got a lot of traction when the Million Dollar Extreme Twitter account retweeted it. It happened again in 2016 in the aftermath of shootings in San Bernardino and at UCLA.

The pranks are stupid, but they’re not often successful. Once officials release the name of the real suspect, the Hyde hype quickly dies down. But in the worst cases, authorities and news outlets fall for the hoax and say Hyde’s name. In 2017, for example, a Texas congressman incorrectly reported Hyde was the shooter in a church massacre that killed 26.

It’s not clear where the Hyde pranks started, or why. The anarchic, often white-supremacist posters at 4chan have a love-hate relationship with Hyde, and Hyde’s own fanbase also loves to troll him. For his part, Hyde seems to think it’s hilarious. In 2016, he gave a trollish, meme-filled statement to Forbes about the latest false accusations against him, adding, “It’s crazy, haha, yeah, crazy, haha!”

Although the joke is three years old and extremely tired—not to mention that authorities have become aware of it and are much less likely to be fooled—trolls are still trotting it out in 2018. As news broke of a shooting at YouTube’s San Bruno, California headquarters, Twitter posters immediately jumped on the Hyde train.

The motivation for trolling has always been to elicit an emotional reaction that trolls can mock and laugh at. In the case of the Hyde meme, the objective is no longer to fool normies and news outlets into blaming Hyde since everyone’s long since caught on. Now it’s about “triggering” people into getting angry at the spread of obvious misinformation.

“Maybe we spread the Sam Hyde meme just for laughs when you freak out,” one troll tweeted after the YouTube shooting.

The only way to win this game is not to play. Just ignore the meme and allow its entertainment value to dwindle to zero.