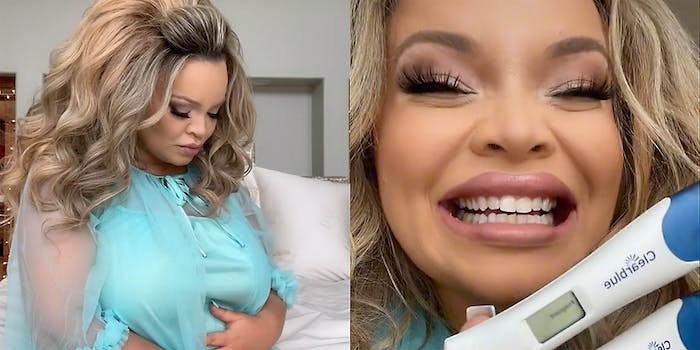 Trisha Paytas reveals they are pregnant

Naturally, the social media star announced their pregnancy in the form of a meme.

After a long struggle with infertility, social media star Trisha Paytas just announced that they’re pregnant—and they revealed the news in the most Trisha Paytas way possible.

Posting to their 6.5 million TikTok followers, Paytas shared a short clip of themself in bed with the caption, “Being told for 8 years, you could never conceive.” The background audio was a familiar Nirvana sample, which on TikTok usually ends in a surprise punchline. This time, the surprise was a handful of positive pregnancy tests.

Paytas has spoken out about their fertility issues in the past, tweeting in 2016, “if God has blessed u with the ability to carry a child, consider urself oh so very lucky. infertility is something i wouldn’t wish on anyone.” They’re now expecting a baby with husband Moses Hacmon, posting a celebratory photo with an ultrasound image on Instagram:

Given that Trisha Paytas is kind of a notorious figure, a lot of the responses are people joking about how a new baby might factor into their attention-grabbing antics online, pre-emptively judging Paytas’s parenting skills. But there are also a lot of genuine well-wishers, with Paytas’s TikTok comments filling up with congratulatory messages.