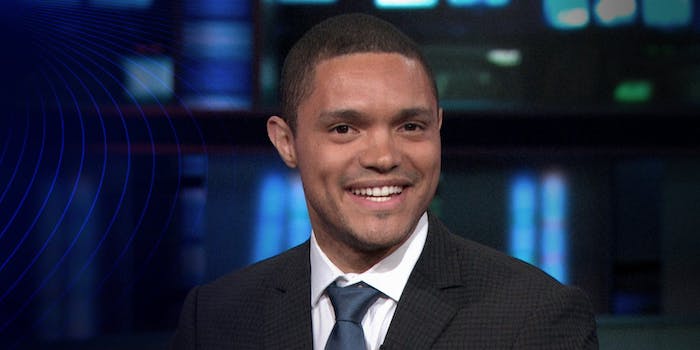 Trevor Noah was a step forward for The Daily Show, but was it the right foot?

When I started working on this piece, I was reflecting on The Daily Show’s heir apparent, Trevor Noah, the South African comic who Comedy Central announced this week would replace Jon Stewart upon his departure from the satirical news program. First, I met this news with some disappointment after the weekend buzz that Noah, yet another dude on late night TV, was the most likely contender for Stewart’s seat at the desk, but then I watched his comedy, and I was onboard.

In the wake of the recent Twittergate controversy where the Internet, searching for answers about what Trevor Noah is about, uncovered six seriously awful tweets of about 9,000 targeting fat women and Jews. And now, as of the writing of this piece, folks are clamoring for answers. These six tweets, while stupid and terrible and tasteless and bad comedy, don’t completely disqualify Noah from the job. In fact, they are irrelevant.

This is not to suggest tweets disparaging bodies and cultures are OK, as I’ve previously written about the impact of offensive comedy. However, the larger body of Noah’s work draws critical focus on global justice, racism, privilege, and power, and that can’t be overshadowed by these inconsequential tweets or take away from what should be a monumental moment in late night TV.

Now that Noah is set to host The Daily Show, Comedy Central will be home to two late night TV programs featuring black hosts—with Larry Wilmore’s The Nightly Show succeeding The Colbert Report in January. This is certainly a big win for diversity in the media industry, but late night TV has yet to address its lady issue. With the addition of Trevor Noah to the late night lineup—which includes two Jimmys, one James, a David (soon to be Stephen), a Seth, and, I guess, a Carson—Comedy Central missed a big opportunity to put a woman in a seat that would have rivaled that of Joan Rivers on The Tonight Show. This presents a major problem with late night TV: It remains miles behind primetime, cable, and streaming channels in terms of gender diversity.

The moment Jon Stewart announced his retirement from The Daily Show, Twitterati lobbied for Stewart’s replacement be a woman. Samantha Bee seemed to be the most logical choice, having been on the show since 2001, but she’s leaving to star in her own show on TBS that will be “a platform for Bee to apply her smart and satirical point of view to current and relevant issues.” Jessica Williams, at 25, the show’s youngest correspondent, politely declined fans’ requests and petitions that she take over for Stewart. “I’m not hosting. Thank you but I am extremely under-qualified for the job!” Williams tweeted. The Billfold shot back at Williams, diagnosing her with “impostor syndrome.” That did not end well.

Bloggers also suggested other great names in comedy take over the position, including Tina Fey, Amy Poehler, Aisha Tyler, Sarah Silverman, Wanda Sykes, and so many more. Responding to a question about gender from the New York Times, Comedy Central president Michele Ganeless  said, “We talked to women. We talked to men. We found in Trevor the best person for the job.”

In response, Kevin Fallon from the Daily Beast writes:

But that “best person for the job” nonsense is […] complete horseshit, and the greatest indicator of the institutional barriers, the institutional laziness, and the institutional cowardice that are forecasting the inevitability that no woman will ever again hold a major position in late-night. And if she does, she’s not going to end up there the easy way.

The easy way being with a built-in audience like Jimmy Fallon had after taking over for Jay Leno, or like Stephen Colbert will have once David Letterman hands over the keys to the studio. Chelsea Handler, the most successful woman in late night, was sequestered to the depths of E! without the reach afforded to the likes of Fallon.

Despite the dearth of women in late night TV, there is a ray of hope in primetime, on premium cable, and on streaming sites. The premiere of Inside Amy Schumer on Comedy Central brought in 2 million viewers last year. The hilarious Broad City has gotten critical acclaim across the board. Netflix’s Orange is the New Black swept the nation in 2013. Amazon’s Transparent further brought transgender issues to the forefront of pop culture. And everything Shonda Rhimes touches turns to televisual gold.

It’s true that these are only a few shows in the sea of male-dominated content, but it is an indication of the steps cable networks and streaming sites are willing to take to expand their reach to a demographic outside of 18 to 34 year-old men.

Late night TV really has no reason to discount women. When it comes to female-centered television, the evidence to their potential success is there. Even though it’s too late for The Daily Show to hire a female anchor, they can continue their sharp, rebellious take on U.S. and global politics by improving the gender diversity of the correspondents and in the writer’s room. Trevor Noah is definitely a great choice to replace Jon Stewart, but when looking at the big picture of late night TV, there’s still some work to do.