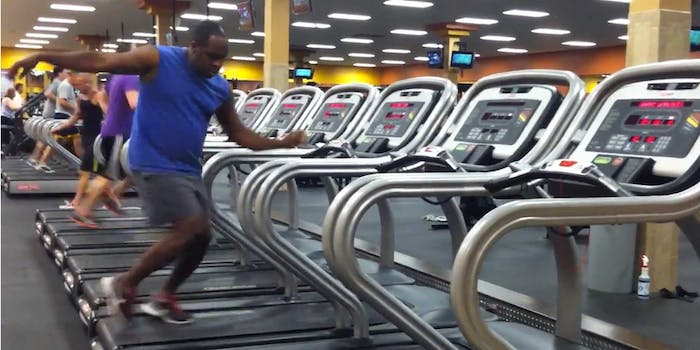 All hail the lord of the treadmill dance

This guy is a one-man OK Go.

Looking for motivation to start going to the gym again? You just found it.

One Florida gym-goer succeeded where thousands of others could not and danced up a storm on a treadmill.

His performance instantly brings to mind OK Go’s “Here It Goes Again,” the 2007 music video that turned the band into Internet legends. While that video involved a lot of coordination between the band members, this guy’s not dancing for the camera or anyone but himself—and his dance moves are much more impressive.

He’s probably not even aware that he’s being filmed.

“I see this guy dancing almost every day on the treadmill,” David Wilson, the person who uploaded the video to YouTube in January, wrote in the description.

Hardly anyone at the gym blinks an eye as he does the moonwalk, turns, and hops between the different treadmills, which suggests that his dance is probably a normal occurrence. He does almost slip at one point, but he quickly recovers and prevents this from being yet another “treadmill dance fail” video.

He does it without music, but Wilson’s already fixed that; he uploaded another version to make it look like the treadmill dancer was actually riverdancing, which works a lot better than it should.

He even makes it look effortless and easy, so expect the number of treadmill-related injuries to rise.